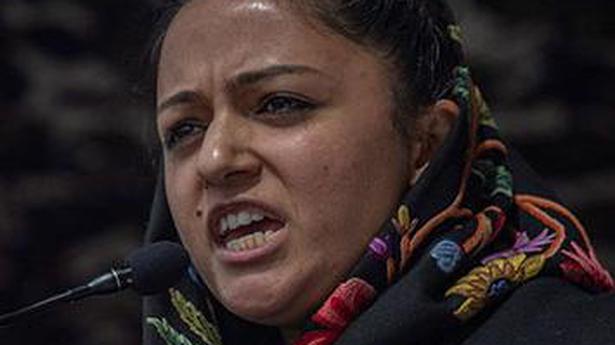 Six months after her entry into mainstream politics, former JNU student leader Shehla Rashid on Wednesday announced her decision to quit electoral politics in Kashmir saying she can’t be a party to legitimising the “suppression” of people.

Ms. Rashid, who has become a prominent face of student activism, had earlier this year joined the Jammu and Kashmir People’s Movement floated by former IAS officer Shah Faisal.

In a statement, the former JNUSU vice-president said she was compelled to dissociate “with the electoral mainstream in Kashmir” due to the central government’s move to hold Block Development Council elections later this month in Jammu and Kashmir, where communication restrictions are in place since August 5 after the Centre diluted Article 370 of the Constitution.

“I cannot be party to the exercise of legitimizing the brutal suppression of my people. I would, therefore, like to make clear my dissociation with the electoral mainstream in Kashmir. I will continue to be an activist and raise my voice against injustice on all fronts that do not require a compromise and I’ll continue to put my energies behind the Supreme Court petition seeking the restoration of special status of the state, and the reversal of bifurcation of the state,” she said in the statement.

She claimed political leaders in the State are being forced to contest elections only on the issue of restoration of statehood, and asked to keep quiet about Article 370 and bifurcation of the State.

“It is clear that participation in any political activity in Kashmir requires a compromise, she claimed.

Ms. Rashid said the government keeps inviting the youth to join the mainstream but alleged its actions have only served to push people out of the mainstream.

The former JNU Students Union leader’s announcement of quitting mainstream politics came on the day the Congress party said it would not contest the Block Development Council polls.

A young couple were killed in Adoor town when a speeding bus crushed them to death on Saturday afternoon. The deceased have been identified as Shyam Krishna, 30, and his wife Shilpa Sathyan, 26, of Ezhamkulam, near Adoor. The incident occurred when the couple were walking along the road near the Sree Moolam Market in […]

To ensure sufficient supply during the lockdown, the government on March 25 decided to increase monthly quota of subsidised foodgrains by 2 kg to 7 kg per person through ration shops for 80 crore beneficiaries. A decision in this regard was taken by the Cabinet Committee on Economic Affairs (CCEA) headed by Prime Minister Narendra […]

What regional parties have lined up for Tamil Nadu’s 2.98 crore women voters

As Tamil Nadu goes to polls on April 18, here is a look at what regional parties have promised the State’s women and transgender voters in terms of safety, reservation, jobs, health and education. Of a total of 845 candidates from both regional and national parties in the fray in T.N., 65 are women and […]