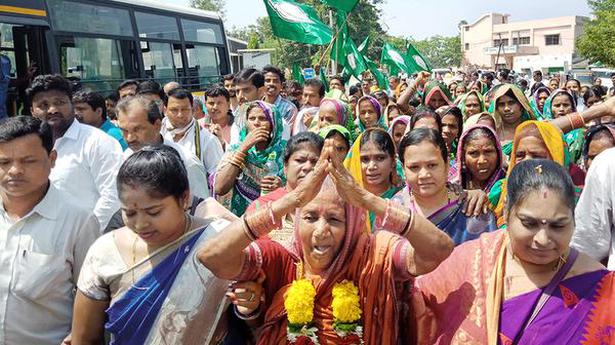 Pramila Bisoi, the brand image of the ruling Biju Janata Dal’s commitment to women’s emancipation in Odisha for the upcoming elections, filed her nomination papers for the Aska parliamentary constituency of Ganjam district on Monday.

The 68-year-old Women Self Help Group leader from a peasant family, is attempting to enter the corridors of power for the first time. She filed her nomination papers before Returning Officer for Aska constituency, Ganjam Collector Vijay Amruta Kulange, at Chhatrapur.

Her rally at Chhatrapur included a large number of women. Speaking to newsmen, Ms. Bisoi from the nondescript Cheramaria village said, “Earlier I was only working for women of my area. But with the blessings of Naveen Patnaik, I will take up the responsibility of 70 lakh women of ‘Mission Shakti’ in my State.”

Mr. Patnaik had declared Ms. Bisoi’s candidature as a tribute to lakhs of women of the ‘Mission Shakti’ movement of the State government. Started in 2001 to empower women, ‘Mission Shakti’ now includes around 70 lakh women members of six lakh WSHGs. The BJD eyes these members as its probable vote base.

Ms. Bisoi’s candidature has extra importance for the BJD. Mr. Patnaik had started his political career in 1997 with a win from Aska in a by-election after the death of his father Biju Patnaik, who represented the constituency.

Ms. Bisoi and her husband Banchhanidhi Bisoi are marginal farmers with less than one acre of land. Her elder son runs a tea stall while the younger one owns a bike repair shop. Ms. Bisoi was a catalyst for sanitation, literacy, tree plantation and promotion of institutional delivery drives in her area. She has been honoured by the State government with ‘Prakriti Mitra’ and ‘Prakriti Bandhu’ awards for her role in forest and peacock protection at Pakidi hill.

Although she has studied up to Class III only, she is confident that using Odia as the medium of communication, she will be able to take up issues related to common people, especially those of women, in Parliament.

Meanwhile, the BJP has fielded political debutante Anita Priyadarshini for the seat. Her mother Kumudini Patnaik was elected from here on a BJD ticket in a by-election in 2000 after Mr. Patnaik resigned as Aska MP to take charge as CM. Congress will support CPI candidate Ramkrushna Panda.

The AIADMK and the DMDK are expected to seal a deal on Sunday for the upcoming Lok Sabha election in Tamil Nadu and Puducherry. The DMDK may be allotted four seats as part of the arrangement, according to sources in the AIADMK-led front. North Chennai, Tiruchi, Kallakurichi and Virudhunagar will be given to the Vijayakant-led […]

Gone are the days when lathi-wielding policemen used to go round localities blowing a whistle. Patrolling has gone hi-tech in the city now as the surveillance is done through a network of closed-circuit television (CCTV) cameras and live-tracking of vehicles fitted with GPS (Global Positioning System) devices from a modern police control room equipped with […]

Former Uttar Pradesh Chief Minister Kalyan Singh on Friday appeared before a special CBI court responding to its summons in the Babri Masjid demolition case. The court holding the trial of various BJP leaders, including L.K. Advani, Murli Manhor Joshi and Uma Bharti for allegedly conspiring to demolish the mosque at the disputed Ram Janmbhoomi-Babri […]