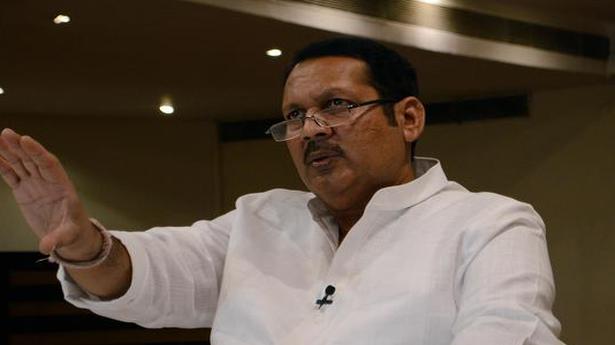 Remarking that no political leader was tall enough to merit comparison with Chhatrapati Shivaji, direct descendant, former MP and Bharatiya Janata Party (BJP) leader Udayanraje Bhosale on Tuesday attacked the ruling Shiv Sena by asking why the Sena founder Bal Thackeray’s photo was placed above that of the Maratha king at the Sena Bhavan in Mumbai.

Speaking to reporters here, Mr. Bhosale, who had conspicuously remained silent over the row triggered by the publication of the BJP booklet Aaj ke Shivaji Narendra Modi, targeted his own party members for coming out with an outrageous book that dared to compare Shivaji with the Prime Minister.

“Shivaji Maharaj is a universal inspiration… no one is tall enough to be compared with him,” asserted Mr. Bhosale, the 13th direct descendant of the Maratha king. “Have some people taken leave of their senses by comparing him with the Prime Minister,” he wondered aloud

He, however, reserved his most withering criticism for the Sena and the Nationalist Congress Party (NCP) who, along with the Congress, have formed the ‘Maharashtra Vikas Aghadi’ (MVA) government in the State.

“Just take a look at the Shiv Sena Bhavan (the party’s headquarters in Mumbai)… look whose image (Bal Thackeray’s) is placed above, whose photo is placed below (Shivaji’s),” said Mr. Bhosale, brandishing photos of the ruling coalition partner’s office in Dadar.

The Sena, which claims to be a party built on Shivaji’s ideals, should change its name to ‘Thackeray Sena’, he caustically remarked.

“Remove ‘Shiv’ (Shivaji) from ‘Shiv Sena’ and then let me see how many youths flock to your standards… this is the party which had orchestrated riots in King Shivaji’s name,” said Mr. Bhosale, a former three-term MP, who had quit the NCP to join the BJP ahead of the State Assembly polls last year.

Questioning their ‘silence’, Mr. Raut had demanded that the descendants of Shivaji including BJP MLA Shivendraraje Bhosale, BJP Rajya Sabha MP Sambhajiraje Bhosale and Mr. Udayanraje, speak up against their party on the booklet row.

The book, penned by BJP leader Jai Bhagwan Goyal, triggered a storm of condemnation across Maharashtra, with a number of protests and effigy-burning demonstrations being held by the Sena, the NCP and the Congress whose activists filed multiple police complaints against Mr. Goyal in different districts of the State.

Mr. Bhosale, who was one of only four elected NCP MPs in Maharashtra in the 2019 Lok Sabha elections, had resigned his post to join the BJP. However, in the Satara Lok Sabha bye-election, he lost to senior NCP leader and former Sikkim Governor, Shriniwas Patil.

A maverick politician known for his hell-raising antics throughout the district, Mr. Bhosale’s defection to the BJP is expected to bolster the saffron party’s standing with the Maratha community.

“When you’ll [the Sena leadership] christened your party as ‘Shiv Sena’, did you people then bother to ask Shivaji’s descendants,” Mr. Bhosale shot back at Mr. Raut.

Lashing out at the opportunistic nature of the MVA government and Mr. Raut’s role in forging an alliance with the NCP-Congress, Mr. Bhosale remarked that the BJP did not “run after power like dogs”.

In a veiled jibe at NCP chief Sharad Pawar, he said referring to someone using the epithet ‘Jaanta Raja’ (the wise king) was tantamount to belittling the Maratha king and that only the 17th century ruler had claim to the title of ‘Jaanta Raja.’

Mr. Pawar has often been attracted the epithet in political circles — a point which some BJP leaders including former Maharashtra minister Sudhir Mungantiwar seized on while defending Mr. Goyal’s booklet and criticising the Sena for its double-standards on the booklet equating Shivaji with Mr. Modi.

A vulture breeding centre in the Vulture Sanctuary in Ramanagaram has been announced by Chief Minister B.S. Yediyurappa in his budget speech. The cost is put at ₹2 crore. The Chief Minister has also announced a ₹6.25 crore programme for the rehabilitation of monkeys in five years. The establishment of a Flue Gas Desulfurization (FGD) […]

I can only pity the DMDK, says Durai Murugan

DMK treasurer Durai Murugan on Thursday said he could only pity the DMDK leaders who “were issuing contradictory statements” about approaching the DMK for an alliance for the Lok Sabha elections at the eleventh hour “trying to save their face”. Talking to reporters, the DMK leader said that he did not know the two DMDK […]