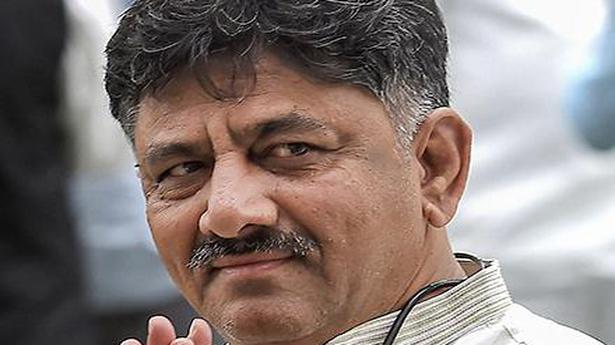 K.N. Rajanna, a Congress leader and president of a cooperative bank, was again questioned by the Enforcement Directorate on Wednesday in connection with a money-laundering case against his party colleague D.K. Shivakumar.

The agency is investigating the sanction of loan to a sugar company owned by an aide of Mr. Shivakumar.

The ED has summoned 51 persons, including Mr. Shivakumar’s wife Usha Shivakumar and mother Gowramma, for recording their statements under the Prevention of Money Laundering Act.

His wife and mother have approached the Delhi High Court seeking that the summonses be quashed. During the proceedings, senior advocate Dayan Krishnan, appearing for Ms. Gowramma, argued that as per the provision of the Criminal Procedure Code (CrPC), a girl below 15 years and a woman above 65 years cannot be called to the police station.

The senior advocate argued that the ED could not have asked his client to come to their office.

The ED informed the court on Wednesday that Mr. Shivakumar’s wife and mother need not to appear before it as of now as fresh summons will be issued.

Mr. Shivakumar was arrested by the ED on September 3. He is in judicial custody, as his bail application was rejected by the court concerned.

The Directorate’s probe is based on a chargesheet filed by the Income-Tax Department, alleging tax evasion and “hawala” transactions. However, Mr. Shivakumar has denied all charges.

Ms. Shivakumar and Ms. Gowramma had moved the High Court challenging the summons issued to them by the ED in the money-laundering case.

Following the submission of the ED, the court has listed the case for further hearing on October 21.

The High Court will hear the Congress leader’s plea on October 17, when the ED will put forward its submission.

The Supreme Court on Friday asked the Centre to respond to an appeal that there is “blatant laxity” by the government in not publishing and ensuring t Source: thehindu.com Related

The Shiromani Akali Dal (SAD) here on Monday took out a candlelight march along with the kin of the victims who died in the train tragedy on Dussehra on October 19, 2018. At least 61 people were killed and over 70 sustained injuries in the tragic incident near Joda Phatak in Amritsar. The march was […]

3 more succumb to COVID in Telangana