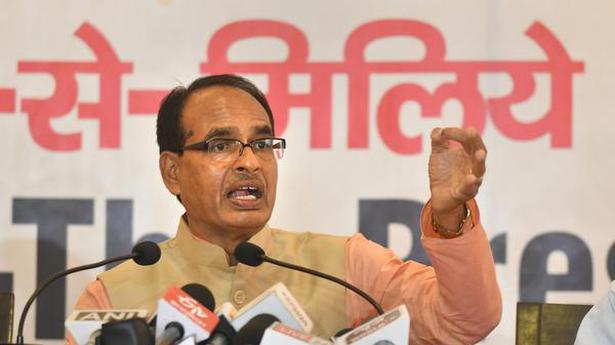 Former Madhya Pradesh Chief Minister Shivraj Singh Chouhan on Wednesday hit out at Congress president Sonia Gandhi and its former president Rahul Gandhi on the Citizenship Amendment Act, the National Register of Citizens and the National Population Register, accusing them of “misleading the people”.

Mr. Chouhan said the Congress and other Opposition parties were spreading hate, violence and unrest. “The CAA Bill was passed in Parliament with due process and diligence after a debate. Sonia Gandhi or Rahul Gandhi did not participate in the debate but she and her family are leading protests against it at the Rajghat.”

Mr. Chouhan said it was Mahatma Gandhi’s desire that after the partition, all non-Muslims who do not wish to live in Pakistan should be allowed to come to India. “In 1950, Prime Minister Jawaharlal Nehru entered into an agreement with the Prime Minister of Pakistan Liaquat Ali — known as Jawahar-Liaquat accord — where both leaders had agreed to protect the rights of the minorities. Studies show the population of minorities in Pakistan was 23% then but it has been reduced to less than 3% now. People from neighbouring countries have fled these countries to escape from religious persecution and seek refuge in India. Should India turn them away? If our Parliament passed a law, I want to ask Soniaji why they [Congress] are opposing it. I’m not talking about Rahul Gandhi as he stays abroad more than he does in India,” he told reporters.

Mr. Chouhan said the NPR was not made by the BJP government but was passed by the Congress-led UPA in 2010. “Since the Congress and the Opposition parties have no issue to take on Prime Minister Narendra Modi, they are using false propaganda and misinformation to mislead the people.” Mr. Chouhan also criticised the Opposition parties for linking the NPR with the NRC.

‘Stun grenades were used to disperse students in AMU’

A fact-finding team led by social activist Harsh Mander visited Aligarh Muslim University on Tuesday to look into police excesses on Sunday night during the clash between students and police. “The university Registrar, who is an IPS officer, has admitted that apart from tear-gas shells, stun grenades were used by the police to disperse the […]

The Indigenous Nationalist Party of Tripura, a tribal-based party, is trying to unite regional parties to voice the demand for a National Register of Citizens (NRC) in the entire northeastern region. Upbeat over conclusion of the exercise in Assam, the party began voicing demand for the same in Tripura. INPT General Secretary Jagadish Debbarma said […]

Coronavirus | About 400 million workers in India may sink into poverty: UN report

About 400 million people working in the informal economy in India are at risk of falling deeper into poverty due to the coronavirus crisis which is having “catastrophic consequences”, and is expected to wipe out 195 million full-time jobs or 6.7% of working hours globally in the second quarter of this year, the UN’s labour […]