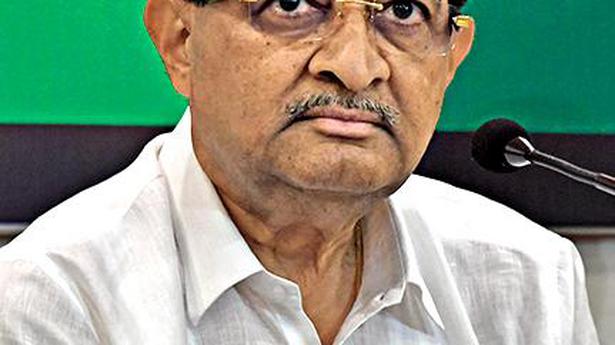 Towering over the key candidates in the contest for the Shirdi Lok Sabha constituency is the long-running feud between the two senior Congressmen in Ahmednagar district — Radhakrishna Vikhe-Patil and former State Revenue Minister, Balasaheb Thorat. It is the influence of these two that will decide the day for the candidates as the seat goes to polls on April 29.

Mr. Vikhe-Patil, till recently the Leader of Opposition (LoP) in the State Assembly, is now actively campaigning for the sitting Sena MP, Sadashiv Lokhande, the Bharatiya Janata Party (BJP)-Sena ‘Mahayuti’candidate of the.

Along with his son Dr. Sujay Vikhe-Patil, Mr. Vikhe-Patil and Mr. Sasane have been working to defeat the Congress-Nationalist Congress Party’s (NCP) candidate, Bhausaheb Kamble, thereby settling his scores with Mr. Thorat.

Mr. Vikhe-Patil, though still nominally with the Congress, addressed the Sena-BJP rally held in support of Mr. Lokhande at Ahmednagar’s Rahata taluk where he targeted the Congress top brass including Rahul Gandhi and Sharad Pawar’s NCP.

Since 1995, Mr. Vikhe-Patil has been elected to the Shirdi assembly seat no less than five times. But this time, the segment will prove a ‘Trojan horse’ for the Congress as Mr. Vikhe-Patil is throwing all his weight to ensure Mr. Lokhande’s win and the Congress’s defeat.

“The battle for Shirdi will be decided on the Assembly segments of Sangamner, Shrirampur and Nevasa. While Mr. Thorat’s stronghold in Sangamner is practically impregnable, the Congress is formidable in Shrirampur and has managed to gain in the BJP bastion of Nevasa,” observes senior political analyst and journalist Mahendra Kulkarni.

According to him, despite Mr. Vikhe-Patil’s straining and stretching, it is the Congress which appears to be in the driver’s seat in Shirdi, bolstered by party president Rahul Gandhi’s Sangamner rally.

The prime reason for this is Mr. Lokhande’s utter disconnect with the electorate of Shirdi, which has alienated him from voters.

“In Shirdi, he [Mr. Lokhande] is known as a ‘Mumbai man’ as he lives there. Ever since he became an MP in 2014, he has never bothered to come down here to address critical problems of water scarcity and civic infrastructure bedeviling Shirdi,” observes Mr. Kulkarni.

Observers say that it was only a couple of months ago that Mr. Lokhande, propelled by election compulsions, hurried to Shrirampur to begin campaigning in his constituency.

In contrast, Mr. Lokhande’s opponent, Bhausaheb Kamble, the Congress MLA from Shrirampur, has a firm grip over his Assembly segment.

The entry of former MP Bhausaheb Wakchaure into the poll fray is expected to play a spoiler as well.

In 2009 general election, Mr. Wakchaure, then with the Sena, had won the Shirdi seat by defeating RPI (A) chief Ramdas Athawale by a sizable margin of more than 1.3 lakh votes. However, he soon switched alliances to contest on a Congress ticket in the 2014 elections, losing heavily to Mr. Lokhande.

“While Mr. Wakchaure’s entry into the fray is expected to affect both the Sena-BJP and the Congress-NCP, it remains to be seen just how big a threat he poses,” said a local election watcher.

The other major issue here is the ruling government’s promise of constructing a canal network to ferry the waters of the Nilwande dam to benefit more than 180 arid villages in Sangamner, Rahata, Kopargaon and Rahuri taluks (part of the Shirdi LS seat) in Ahmednagar and a few in Nashik.

“If the voters feel that the BJP or Mr. Fadnavis can complete this project, they might just forgive Mr. Lokhande his apathy and stand by the saffron coalition,” opines another election watcher.

Sunday’s terror strikes in Sri Lanka – that is otherwise considered to be among the most popular tourist spots for Indians – have caused a huge dent in the country’s tourism prospects. But travel agents here are divided. While some say people are anxious to travel to the island nation, others say that there have […]

Water from the Linganamakki reservoir in Karnataka’s Sagar taluk is being released into the Sharavathi river as the level is nearing it maximum capacity. On Tuesday, water is being let out at the rate of 15,993 cusecs by lifting 11 gates as the level has reached 1,818.90 ft against the maximum level of 1,819 ft. […]