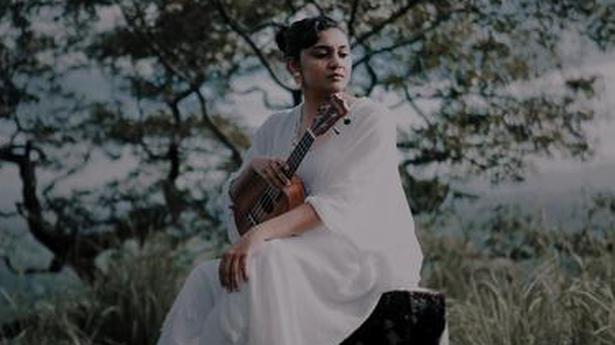 Arya, who shot to fame during the lockdown with her fusion music and ukulele, has written, composed and sung the track

It was during the lockdown that Arya Dhayal took the social media by storm with her singing. Arya is now out with her new English single, ‘King of My Kind’, which she has written, composed and sung.

A bundle of nerves prior to the before the release of the video, she is happy that the song has been received well. “I had apprehensions about the reception to an English song because most of my listeners are Malayalis. But the response has been overwhelming,” says the 25-year-old, a native of Kannur in Kerala.

Arya says that the song is about her “dreams, life and destiny”. It is all about her journey as an artiste and a person. The lyrics clearly say that the going has been tough for her — ‘I’ll be like the one I wanna be/I’ll do all the things I wanna be/I have a list what mamma said never do/but it got the things which I wanna be in true/Holdin up I would walk like I’m king of my kind’

“It was not easy to break free of the barriers — cultural, gender-based and the like. The effort I took to overcome each of those challenges has been put forth in the lyrics,” says the musician. She had released a single last year, ‘Try my self’, which had gone unnoticed. “But now I am proud to have made a video with the money I earned from YouTube. I even got help from an anonymous fan. That’s why I call this a production of Arya Dhayal and friends. I am indebted to each subscriber. Also, most of the people behind the video are people whom I met on the social media,” she adds.

Arya had shot to fame on social media in 2016 for her soulful recital of a poem, ‘Sakhavu’. After a break she came into the limelight again during the pandemic. A trained Carnatic musician, she had finished her studies and was in Bengaluru looking for a job when the lockdown was announced. Stuck at her paying guest accommodation, she used her phone to shoot videos of her singing on the terrace of her paying guest accommodation and uploaded it on her pages. She started doing videos blending Carnatic and Western music, playing the ukulele.

Among her followers are the who’s who of Indian music and film industry, including Amitabh Bachchan who posted about her video in which she combines Suddha Dhanyasi raga with Ed Sheeran’s phenomenal hit, ‘Shape of you’. Other viral videos of Arya include a medley with swaras in Thodi raga, a Kathakali padam from Nalacharitham— Day IV and ‘Believer’ by Imagine Dragons, Charlie Puth’s ‘We don’t talk anymore’ with ‘Entharo mahanubhavulu’, The Chainsmokers’ ‘Closer’ and ‘Vathapi ganapathim’ and a Carnatic version of Taylor Swift’s ‘Blank Space’.

‘King of My Kind’ also has fused Carnatic and Western music. “Carnatic music is part of my daily life and I can’t keep it out of the music I make. This song is based in Suddha Dhanyasi raga and I wanted Hriday Goswamy [the producer and arranger of the song] to bring in a balanced blend of pop and Carnatic genres,” she says.

On her decision to bring out an English track, Arya avers that she can convey her thoughts better in English than in Malayalam. “I started listening to English songs when I was in Plus One and have written over 10 songs till now,” she adds.

Looking ahead, Arya says that she wants to concentrate on independent music. “Our music industry is heavily dependent on film music. It is disappointing when original compositions by bands and musicians go unnoticed. However, times are changing. During the pandemic most of the composers came out with original compositions on social media. So I feel that in another five years or so, independent musicians will find more success,” she adds.

‘King of My Kind’ is available on YouTube. The video is directed by Amal Komath and Abhijith Kuttichira. Cinematographers are Favaz Afi & Faseen visuals and editing is by Artofshambu.

BJP MLA misleading people on use of Krishna waters for irrigation: M.B. Patil

Accusing A.S. Patil Nadahalli, BJP MLA, of trying to mislead the people on utilisation of Krishna waters for irrigation, Home Minister and former Water Resources Minister M.B. Patil said the Karnataka government cannot use the surplus 173 tmc of water under phase III of Upper Krishna Project for irrigation until the Centre notified a gazette […]

Pakistani troops shelled mortar bombs on villages along the International Border (IB) in Jammu and Kashmir’s Kathua district, damaging two houses and injuring cattle, officials said on Wednesday. The heavy mortar shelling by Pakistani troops in violation of the ceasefire triggered panic among border residents. The firing and mortar shelling on Rathua and its neighbouring […]