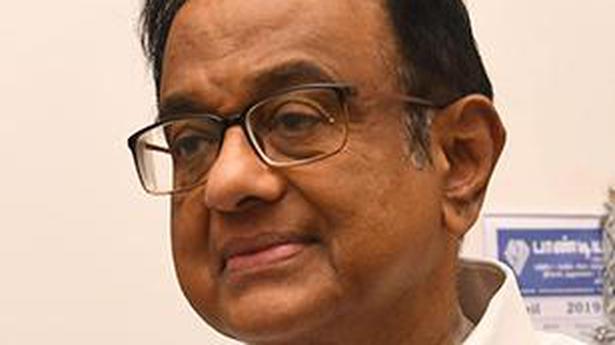 Stating that the Congress manifesto had become the principal talking point across the country, former Union minister P. Chidambaram, on Friday said Prime Minister Narendra Modi has been rattled by the development.

Speaking to The Hindu, the Congress leader said there was a delay in the party high command fielding his son Karti Chidambaram in Sivaganga as it was one of the seats that was under consideration for Congress president Rahul Gandhi to contest — other than Wayanad and a seat in Karnataka.

Mr. Chidambaram expressed apprehension that if the BJP secured a majority, it would attempt to amend the Constitution. “Mr. Modi believes in a presidential system. He is running his government as if he was a President… I think Mr. Modi will attempt to change the system…,” he said.

The Belum Caves festival concluded on a grand note on Sunday at Kolimigundla mandal. A total of 721 artists, including 72 students, performed in the two-day fete. The Belum Caves Utsavalu – 2020 was held to promote the cave system, which is the largest cave system open to the public on the subcontinent extending about […]

Brazilian President Jair Messias Bolsonaro will on Friday begin a four-day visit to India, primarily as Chief Guest on Republic Day and to explore ways to boost trade ties at a time both large economies were hit by slowdowns. On his first visit to India after assuming power, Mr. Bolsonaro will be accompanied by seven […]

Students protest over ‘silence’ on HC issue in Assembly

The Rayalaseema students’ Joint Action Committee protested outside the Collectorate demanding the government to discuss establishment of High Court in Rayalaseema in the Assembly. The students, with black ribbons on their mouths, participated in ‘silent protest’. Criticising the government for not according priority to the issue, JAC Convener, B. Sriramulu, said, “Kurnool gave 14 MLAs […]