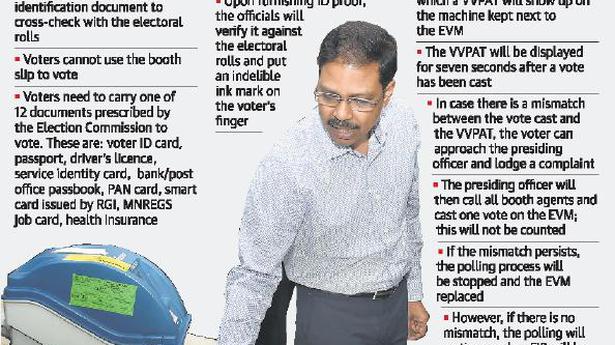 Almost six crore voters are expected to take part in the polling process in Tamil Nadu when the State votes for 38 Parliamentary constituencies and bypolls to 18 Assembly constituencies on Thursday.

Polling will begin at 7 a.m. across the State and end at 6 p.m. Those in queue at 6 p.m. will be given tokens by the presiding officer to complete the voting process.

In Madurai Parliamentary constituency alone, polling has been extended till 8 p.m. on account of the Chithirai festival, and those in queue at 8 p.m. will be given tokens to cast their votes.

The Election Commission has made elaborate arrangements for smooth conduct of the elections, CEO Satyabrata Sahoo said.

The polling materials — EVMs and VVPAT machines — were moved to the respective polling booths on Wednesday with heavy security, and the vehicles fitted with GPS were monitored in real time by the CEOs office and the respective DEOs, he said

There are 8,200 sensitive polling booths in the State, and the Election Commission will deploy the Central Paramilitary Forces or micro observers or resort to webcasting or constant videography of these booths to ensure there are no problems on the polling day, Mr. Sahoo said.

There are 160 companies of Central Armed Police Forces and one lakh personnel from the State police, who will maintain law and order, he said.

Ex-servicemen, retired service personnel and NSS volunteers will also assist them. There are more than 3.5 lakh polling officials deployed to enable voters to cast their vote.

In case voters encounter any problems, including disruption of the polling process, violence, they can contact the toll free number ‘1950’ and register their complaints or issues they face on polling day.

The Election Commission has set up live streaming of proceedings in 30,000 polling booths. Officials from the CEO’s office, the District Election Officers and Returning Officers will monitor the conduct of the polls in these polling booths to ensure the process goes off smoothly.

The surveillance teams of the Election Commission will also be on the move all through the day and conduct checks to prevent any attempts to bribe voters.

The vehicles of the surveillance teams have also been fitted with GPS and will be monitored.

Family members of several active and slain militants, Over Ground Workers (OGW) and apple traders in Kashmir are under the National Investigation Agency (NIA) scanner as the national agency on Monday continued to pursue the case of recently arrested Deputy Superintendent of Police (DySP) Devinder Singh’s links with militant outfits. Singh was arrested on January […]

Urban forest, park to come up in Warangal in December

Come December, citizens can visit a new urban forest and park with state-of-the-art facilities on an 87-acre land at Rampur. The district administration is in the process of developing the urban forest (50 acre) and park (20 acre) with a play area and walking track. “People can have a feel of a forest comprising Eturnagaram […]

‘Interference’ in judicial selections, transfers does not augur well for the institution: SC

The Supreme Court on Monday issued a general reprimand against “interference” in judicial appointments and transfers, saying such intrusions did not “augur well” for the institution. The admonishment from a Bench led by Chief Justice of India (CJI) Ranjan Gogoi came in a petition filed by the Gujarat High Court Advocates Association regarding a proposed […]