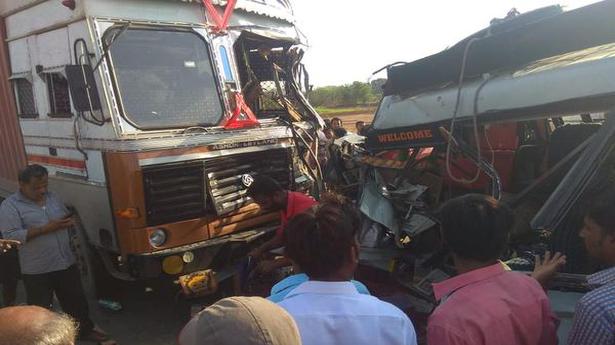 Six persons died, eight others grievously injured when a mini van and a container lorry collided head-on at Yerraguntlapalle village on Kadiri-Madanapalle highway in Anantapur district of Andhra Pradesh on Friday.

Kadiri Circle Inspector of Police told The Hindu that the accident took place around 6.30 a.m. All the deceased and injured were passengers in the van that was coming towards Kadiri. The injured were shifted to various hospitals. The drivers of both the vehicles are absconding from the scene.

The deceased were identified as Katepalli Dastagiri, 50; Khader Basha, 45; Shiva Nagesh, 30; Derangula Parvathamma, 42; Peddapalli Munna, 50. Reports from hospital said a sixth person also died while being treated for injuries. The identity of the person could not be ascertained. The three men and two women who died on the spot hailed from Tanakallu in Anantapur district.

Keralites living in other States too can now join in pravasi chits by the Kerala State Financial Enterprises (KSFE), Chief Minister Pinarayi Vijayan has said. Speaking after inaugurating the renovated building and the Golden Jubilee celebrations of the KSFE here on Sunday, he said the KSFE chittis had been warmly welcomed by the pravasis. There […]

The Supreme Court has decided to examine the appeal of a 16-year-old girl, lodged in a shelter home on the orders of the Allahabad High Court, to return to her 24-year-old “husband” whom she married in accordance with the Mohammedan law. A Bench led by Justice N.V. Ramana has issued notice to the State of […]

A bureaucrat’s musings on the environment

It was his desire to write a book for a long time. But, it was only a year ago, senior IAS officer Atulya Misra sat down to jot down his thoughts for his first book, a novel, to be published. Oxygen Manifesto, his fictional work is about how two persons are concerned about environmental degradation […]