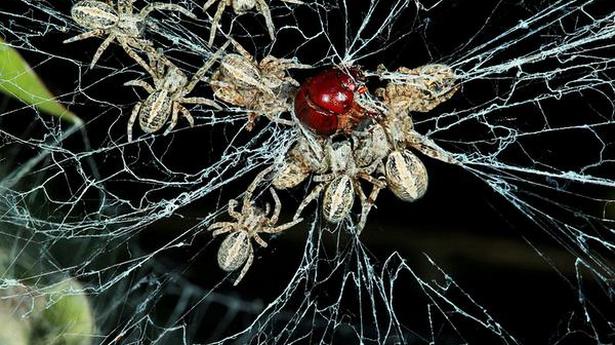 Finding of social spiders (spiders found in groups, which usually live in dry area) in abundance in Kerala indicates the drastic changes in State’s climate, says a research team of Christ College, Irinjalakuda.

The spiders usually live in dry, tropical regions where insect population is high. They are called social spiders or cooperative spiders as they live in groups unlike the common spiders, which are solitary in nature and even aggressive towards other spiders.

Social spider nests can contain hundreds or thousands of individuals, which build communal webs to capture insects. Indian cooperative spider is Stegodyphus sarasinorum, one of the three permanently cooperative species in the genus Stegodyphus.

The aim of the study was to analyse the efficiency and prey immobilising characteristics of cooperative spiders under natural conditions in relation to the type and size of the captured prey. A research team of the college — Drisya Mohan and Kashmeera Anirudhan — had conducted the study under the guidance of Dr. Sudhikumar.

It makes large complex silk nest of variable sizes on bushes, shrubs, rocky areas and open fields, where flying insects are abundant. The site identified for the study was on the Christ College campus and the study was undertaken during the period of June-September 2017.

Cooperative social spiders share a communal web and nest where the colonies can extend to group sizes from 300-500 of individuals.

Among the 30 nests analysed on the Christ College campus, the team found that the most abundant prey of S. sarasinorum was the order Coleoptera (beetles). The second most abundant prey is Orthoptera, which includes grasshoppers. The research team, which had earlier conducted studies on the characteristics of Wolf spiders, had proved that climate change had influenced the nature and habitat of various spiders. Wolf spiders got the name as they chase and pounce on insects. The study has been published in Arachnology Letters, an international science magazine published form Germany.

They say approach would be ineffective because asymptomatic persons in a green zone could infect others and, in turn, the supply chains that ran across zones Source: thehindu.com Related