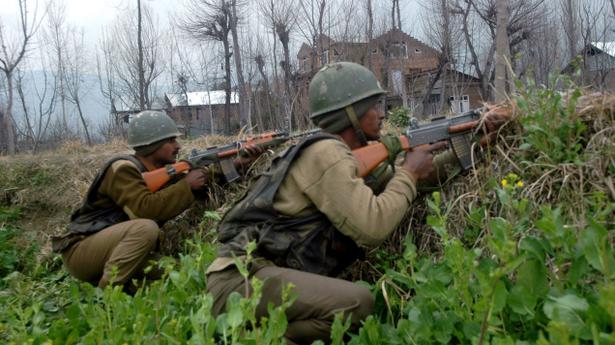 A soldier was killed by suspected militants in south Kashmir’s Pulwama on Wednesday.

Ashiq Hussain of J&K Light Infantry was shot at by masked gunmen outside his home at Naik Mohalla in Pingleena village in the afternoon, a police official said.

The 25-year-old soldier had come home last month. A joint team of the army and the police’s special operation group have launched a cordon-and-search operation in the area to nab the assailants.

Congress needs Gandhian approach to get mojo back: Sam Pitroda

The Congress needs to take the “Gandhian approach” of public service and get 5,000 workers in every district dedicated to the cause of helping people to get its mojo back, technocrat-turned-politician Sam Pitroda said on Wednesday. Mr. Pitroda said all Congress leaders must spend six months studying the father of the nation on his 150th […]

Protest over arrest of Shruti Bellakki

The BJP took out a protest rally in Dharwad on Friday against the arrest of Shruti Bellakki, who faces the charge of making inflammatory remarks against Home Minister M.B. Patil through a video she posted online. Pralhad Joshi, MP, walked to the Deputy Commissioner’s office and submitted a memorandum to the government condemning her arrest. […]