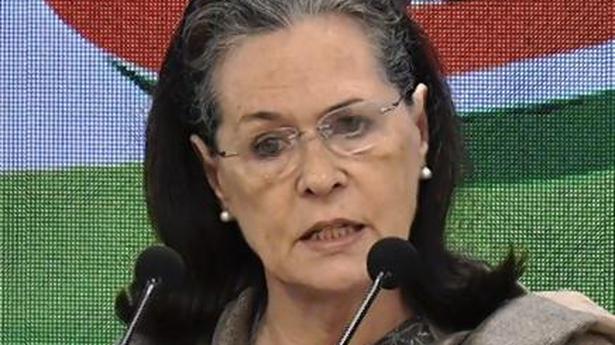 In separate letters to both of them, the Congress president said that their election would work to heal the division among the people and hoped for close partnership between the U.S. and India.

In separate letters to both of them, Ms. Gandhi said that their election would work to heal the division among the people and hoped for close partnership between the U.S. and India.

Hailing Ms. Harris’ election as a victory for the African-American and Indian- American communities as well as the values enshrined in the American Constitution, Ms. Gandhi said India was waiting to warmly welcome the Vice- President-Elect as “a beloved daughter of India”.

In her letter to Mr. Biden, the Congress president said Indian people, like millions around world, had followed with great interest the course of the election during the last 12 months.

“We were greatly re-assured by your measured speeches, stress on healing divisions among the people, and promotion of gender and racial equality, global cooperation and sustainable development of all countries. The Indian people share these concerns and we are confident that India and the United States will continue to work together, as in the past decades, for the welfare of the people of both countries,”she said.

The Congress leader said India and U.S. shared strong bonds in the area of trade and business, education, technology and defence cooperation.

“Under your wise and mature leadership we look forward to a close partnership that will be beneficial to peace and development in our region and around the world,” she said.

She told Ms. Harris: “Your victory is a victory for the noble values enshrined in the American Constitution — democracy, social justice, and racial and gender equality”.

“It is a triumph for Black Americans and Indian Americans, and for the humanity, compassion and inclusiveness that you have stood for throughout your public and political life. I admire the unwavering courage with which you have fought for your convictions — the beliefs and values you imbibed from your remarkable mother!” Ms. Gandhi said.

Hoping that Ms. Harris would work towards uniting a bitterly divided nation, strengthen the ties of friendship with India and support democratic values and human rights, the Congress chief said the party was looking forward to welcoming her soon.

“We hope we will have the opportunity soon to welcome you to India, where you will be warmly hailed not just as a much-admired leader of a great democracy, but also as a beloved daughter,” she said.

A spectator was gored and at least 12 people, including six bull tamers and two policemen, were injured in the manju virattu organised at Irumathi village, near Devakottai on the occasion of Maha Shivaratri on Wednesday evening. The police said, C. Mani, 48, was among the 6,000 spectators who came to witness the event at […]

After a prolonged battle with the Central Board for Film Certification (CBFC), film-maker M.S. Raj on Monday said his docu-drama Marina Puratchi, which is based on events that unfolded during the jallikattu protests, has received an ‘U’ certificate and will release in the last week of May. Speaking to reporters at the Chennai Press Club, […]

PM Modi to interact with fitness influencers, citizens on Sept. 24