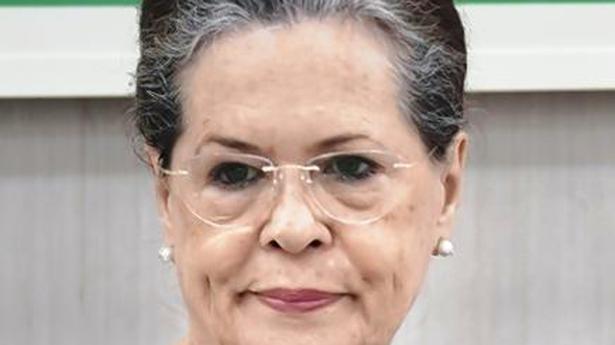 “A democratic and resilient India at 73 has no place for bigotry, superstition, sectarianism, fanaticism, racialism, intolerance or injustice. Yet millions of fellow citizens encounter discrimination every day,” Ms. Gandhi said in her message.

“We must rise as a nation to stand against every act of injustice, intolerance and discrimination to truly cherish our freedom,” she added.

In his message, CPI(M) general secretary Sitaram Yechury reminded citizens of India’s pluralism as a core value of the Constitution.

“We must never forget that all Indians are equal and free, irrespective of the language they speak, the food they eat, the clothes they wear, the person they marry, the god they pray to (or don’t) or the colour of their skin,” Mr. Yechury said.

Former Union Minister P. Chidambaram also took to Twitter to ask why “freedom was being denied” to three former Chief Ministers of Jammu and Kashmir on the occasion of Independence Day.

“Why is freedom being denied to three former CMs of J&K since August 6th? Why are two former CMs under virtual solitary confinement and one former CM under house arrest? Why are political leaders who fought secessionists and militants locked up?” asked Mr. Chidambaram

The former Union Home Minister, also questioned the detention of Kashmiri bureaucrat-turned-political activist Shah Faesal who was stopped at Delhi airport from flying to Turkey and was sent back to Srinagar.

“Why is freedom being denied to a son of India and Kashmir, Shah Faesal? ,” he tweeted.

In a first for Parliament, Lok Sabha Speaker Om Birla presided over a flag-hoisting ceremony inside the Parliament complex.

He urged citizens to be participants in building a new India.

Terror incidents in J&K have come down to almost nil: Rajnath

The weekly flea market in Srinagar witnessed a huge rush of customers on Sunday, four days after threatening posters had enforced a shutdown in most parts of Kashmir, officials said. Shops opened on Sunday morning at some places in the Kashmir valley, including here in civil lines areas of the city and mini buses plied, […]

The State has registered the sixth COVID-19 positive case, which is the first case of direct transmission, in Visakhapatnam on Sunday. The patient, a 49-year-old woman, reportedly contracted the novel coronavirus from her close contact, a 65-year-old man, who tested positive to the virus on March 17, as per the Health department’s bulletin. The man […]