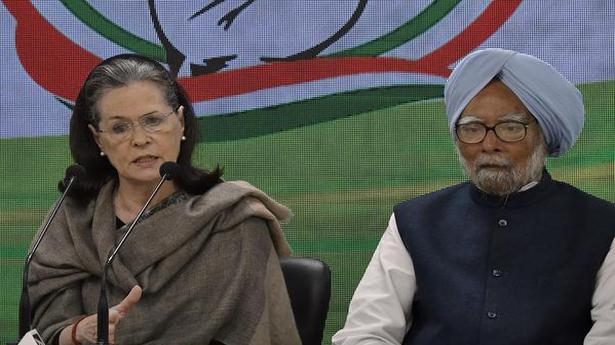 While former Finance Minister P. Chidambaram, and party leaders Mallikarjun Kharge and Digvijaya Singh will be part of the economic affairs committee, Jairam Ramesh will be its convener.

While former Finance Minister P. Chidambaram, and party leaders Mallikarjun Kharge and Digvijaya Singh will be part of the economic affairs committee, Jairam Ramesh will be its convener.

The committee on foreign affairs will have Anand Sharma, Shashi Tharoor, Salman Khurshid and Saptagiri Ulaka. Khurshid will be the convener of the panel.

The committee on national security will have leader of opposition in Rajya Sabha Ghulam Nabi Azad, party leaders Veerappa Moily, Vincent H Pala and V Vaithilingam, with Pala as its convener.

“The Congress president has constituted three committees to consider and discuss issues and policies related to the subjects of economic affairs, foreign affairs and national security,” an official statement from AICC general secretary KC Venugopal said.

Incidentally, among those nominated in the committees include senior party leaders Ghulam Nabi Azad, Anand Sharma, Veerappa Moily and Shashi Tharoor, who were part of the 23 letter-writers seeking an organisational overhaul of the Congress.

While Mr. Sharma is the chairman of the AICC foreign affairs department, Shashi Tharoor heads the party’s Professional Congress.

Two of the fishermen from Andhra Pradesh, who were stranded at Veraval in Gujarat following the nation-wide lockdown, died, the National Fishworkers’ Forum said on Wednesday. Forum executive member K. Lakshmi told The Hindu that K. Raju, a resident of D. Matchyapalem in Srikakulam district, allegedly died due to fear of contracting coronavirus. Another fisherman, […]

61 villages in the grip of severe water shortage in Mandya

Residents of 61 villages in K.R. Pet, Maddur and Nagamangala taluks in the district are facing severe drinking water scarcity for several days now. This was discussed at a meeting chaired by Javed Akthar, district in-charge secretary, here on Monday. He issued instructions to the officials to address the issue. He also suggested that tahsildars […]