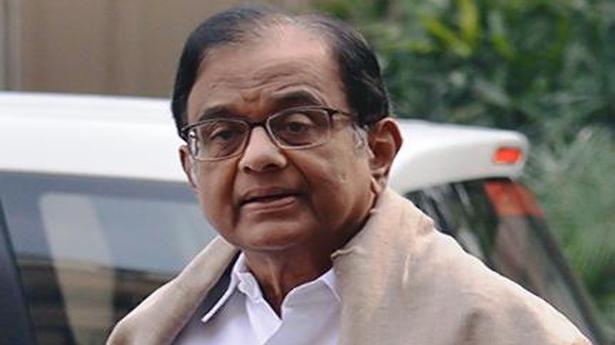 Senior Congress leader P. Chidambaram on Monday took a swipe at the Modi government, saying that with the sound of drums having faded, will the Centre listen to the cry of workers who have been laid off and the voices of the apple growers in Kashmir as well as of onion farmers in the country.

Mr. Chidambaram, who is in custody since his arrest by the CBI on August 21, asked his family to put out a series of tweets on his behalf in which he took a dig at the government over its economic policies.

“The sound of drums has faded. Will the powers that be now listen to the cry of workers who have been laid off or lost their jobs forever? According to a report, 1 lakh workers in the Diamond industry in Surat,” the former Finance Minister tweeted.

“Will they listen to the voices of the apple growers in Kashmir? If everything is normal, why are the traditional merchants not bringing their trucks to Kashmir to buy and transport the apples?” he said.

“Will they listen to the voices of the onion farmers? Why can’t the government strike a balance between the price the farmer deserves and the price the consumer can afford? Read Dr. Ashok Gulati,” the Congress leader tweeted.

Mr. Chidambaram on Monday failed to get any relief from the Delhi High Court which dismissed his bail plea in the INX Media corruption case, saying the investigation was at an advance stage and his influencing the witnesses cannot be ruled out.

The carcass of a 12-foot-long whale shark, an endangered species, was washed ashore, off the Vambakeerapalayam coast, on Thursday.According to forest Source: thehindu.com Related