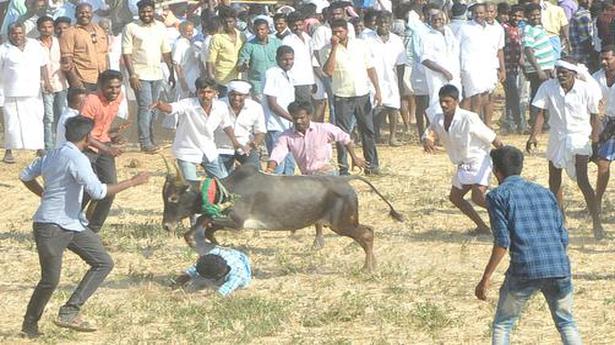 A spectator was gored and at least 12 people, including six bull tamers and two policemen, were injured in the manju virattu organised at Irumathi village, near Devakottai on the occasion of Maha Shivaratri on Wednesday evening.

The police said, C. Mani, 48, was among the 6,000 spectators who came to witness the event at the local Kali temple. A bull on being let out through vaadi vaasal gored him on the right side of the chest.

He was rushed to the government hospital, where doctors said he was brought dead.

Tension in the air

There was tension in the air soon after the event started, as the gallery, erected to accommodate about 25 officials and organisers, collapsed as more than 250 people occupied it.

Most of the injured were treated at the Devakottai government hospital.

Two policemen, Velmurugan and Manikanda Prabu, from the sixth battalion, were injured when they were hit by the bulls in the open area, police said.

The bulls and bull tamers were certified by revenue officials and doctors, but the enclosure for the bull tamers had limited space.

Once the bulls were let into the arena through the vaadi vaasal, the bull tamers tried to tame them.

As the animals ran helter-skelter they made a hasty retreat. Locals said the manju virattu was organised every year during the temple festival but adequate safety measures were not taken.

Story of father of Indian space programme in photos

The story of the Indian space programme is closely entwined with the story of Vikram Ambalal Sarabhai. A slim commemorative volume published by the Indian Space Research Organisation (ISRO) offers, through a clutch of black-and-white photographs, valuable glimpses into the life and times of the remarkable man and the evolution of the ISRO. Dr. Vikram […]

When you see roads, rails, are they being built without employment: PM Modi