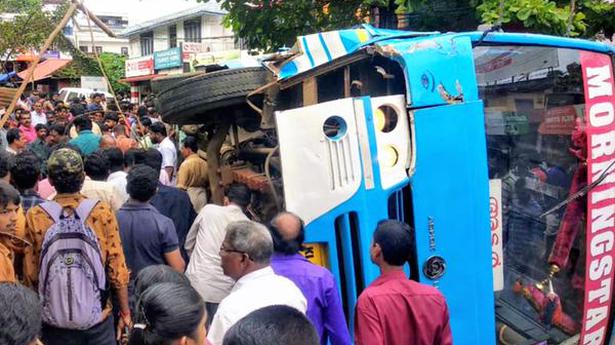 A young couple were killed in Adoor town when a speeding bus crushed them to death on Saturday afternoon.

The deceased have been identified as Shyam Krishna, 30, and his wife Shilpa Sathyan, 26, of Ezhamkulam, near Adoor. The incident occurred when the couple were walking along the road near the Sree Moolam Market in Adoor town.

The speeding bus rammed into a wayside bunk shop and a peepal tree before fatally crushing the couple. The Fire and Rescue Services team and the local people took out the bodies after overturning the bus using ropes and pulley. The bus driver, Ullas of Krishna Sadanam at Kallumkadavu, was found in an inebriated state. He was arrested, later.

The bodies were shifted to the General Hospital at Adoor for post-mortem.

G. Jayadev, DPC, and P.B. Noohu, District Collector, were among those who visited the accident site.

An Uttar Pradesh Minister on a visit here on Thursday refused to meet the families of the two Muslim men who died in the recent protests against the new citizenship law, terming them “upadravi” (vandals). “Why should I go to vandals’ place? How can those who are involved in vandalism and put the entire country […]

The Kerala police on Thursday indicted three women believed to be Communist Party of India (Marxist) workers for electoral fraud. They identified the accused as M.V. Salina, K.P. Sumayya, and Padmini. The suspects have been charged for committing voter fraud in booth number 19 at Pilathara in Kannur district in Kasaragod Lok Sabha constituency segment. […]

For the first time since 2003, an ally of the BJP is expected to face a strong opposition in the Bodoland Territorial Council (BTC) polls in Assam. Elections to the 40-seat tribal council are scheduled in April. The council, established under the Sixth Schedule of the Constitution and headquartered in western Assam’s Kokrajhar town, covers […]