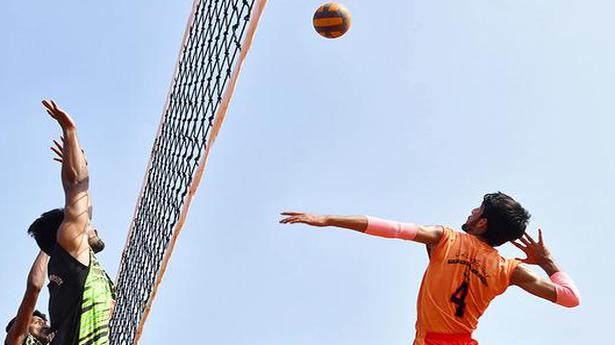 The SRR college in the city was buzzing with activity on Tuesday as the players gathered to display their stellar performances at the South Zone Inter-University Men’s Volleyball Tournament, organised by Krishna University, Machilipatnam.

The sound of the volleyball being launched in the air at the command of the referee and the boisterous anthems of the teams upon winning a point sent a thrill across the audience.

“We have trained intensively for the tournament and hope to win the trophy this year,” said a student of Anna University, Chennai, who was warming up at his team’s dugout minutes before their game.

Human Resources Minister, Adimulapu Suresh, who inaugurated the programme later in the day, said that the government was making determined efforts for the advancement of the sports sector in the State. Highlighting that sports was as important to a student as education, Mr. Suresh said that the government was encouraging universities to conduct sports events at a national level.

After delivering his address, Mr. Suresh interacted with the students from various colleges and later tried his hand at the game by performing an underhand serve.

Ninety-two colleges from the five south Indian States and Puducherry have registered in the five-day-long tournament, which will conclude on November 30. The maximum number of colleges have come from Tamil Nadu (33), followed by Karnataka (22) and Andhra Pradesh (19). Only one institution from Puducherry, Pondicherry University, is participating in the tournament.

An attempt to snatch the answer paper from the invigilator by a student was reported in Mahabubnagar in the ongoing Intermediate examinations on Thursday. A statement from the Board of Intermediate Education (BIE) said the culprit was caught and handed over to the police. The second language paper of the second year was conducted on […]

Helicopter ride takes off at KRS

Noting the success of helicopter joyrides at other places in the State in recent months, the Mandya district administration launched similar services near the backwaters of the Krishnaraja Sagar (KRS) reservoir on Sunday ahead of the Srirangapatna Dasara which will be held here from October 3. Former Minister C.S. Puttaraju and others inaugurated the seven-day […]

Senior Congress leader Yashomati Thakur had a heated argument with Mumbai police and doctors on Friday after she was stopped from meeting Shrimant Patil, the party’s MLA from Karnataka who has been admitted to the State-run St. George Hospital. Mr. Patil had complained of chest pain and subsequently admitted to the hospital’s VIP room on […]