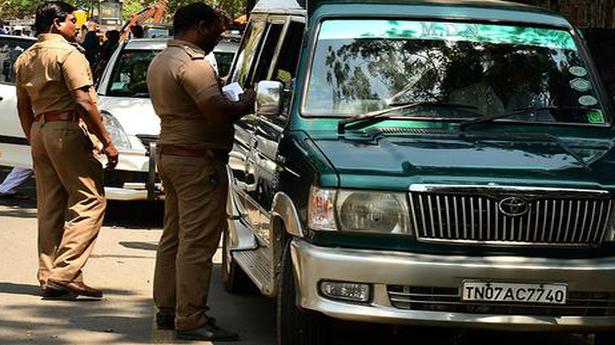 A sum of ₹13.9 crore has been seized across the State so far by static surveillance teams and flying squads, which are strictly monitoring the implementation of the Model Code of Conduct ahead of the April 18 single-phase Lok Sabha election and bypoll for 18 Assembly constituencies in the State.

The sum was seized by officials from persons who did not possess documents to support the reason for carrying the cash.

Officials involved in election work have removed the defacement on 1,67,933 spots of public property and registered 224 cases in this regard. Similarly, defacement has been removed from over 1.36 lakh spots in private properties and 148 cases have been registered, Chief Electoral Officer Satyabrata Sahoo told a press conference in Chennai.

Of the 21,899 licensed arms registered in the State, 18,768 have been deposited with authorities. Besides, 63 of them have been impounded and 32 licences cancelled. Arms in the custody of the police, security agencies and banking officials have not been deposited.

Two persons have been taken into preventive custody and bonds obtained from 3,563 people that they would abide by the rules of the Election Commission in the conduct of elections.

A total of 597 complaints were received through the cVIGIL mobile application developed by the Election Commission and action was being taken on them, Mr. Sahoo said.

Through the ‘1950’ helpline, the Election Commission received 60,853 calls and of them, 54,789 calls were for seeking information regarding the voter ID cards and related issues, he said.

Banking officials have apprised their employees of the documents they need to carry while transporting cash to various areas and ATMs. They have been told that the Election Commission should be alerted in case of unusual funds transfer and ATM transaction and in case of any suspicious movement.

Mr. Sahoo said that candidates, who were to submit details of criminal cases pending against them to the Returning Officer, would have to submit a copy each to the District Election Officer as well as the Chief Electoral Officer.

Replying to a complaint over the visit of Congress president Rahul Gandhi to a private college in Chennai, where he addressed the students, Mr. Sahoo said since prior permission was obtained for the event, there was no violation of the model code on that account.

As for the content of Mr. Gandhi’s speech, Mr. Sahoo said information had been sought from election officials over the event.

Asked about DMK’s complaint over the statement of Minister D. Jayakumar that if people voted for the AIADMK, they would get ₹1,500 a month in their bank account, Mr. Sahoo said that it was awaiting a report from the District Election Officer and action would follow.

To a question on bypoll to Sulur Assembly constituency in the wake of the death of AIADMK MLA R. Kanagaraj, Mr. Sahoo said as per normal practice, information would be received from the State Assembly over the death and then the Election Commission would take a decision.

EVMs to be used in Nizamabad LS poll

The Election Commission of India has finally announced its decision to use EVMs for the forthcoming Lok Sabha election in Nizamabad Lok Sabha constituency. The EC which examined the reports submitted by Chief Electoral Officer Rajat Kumar, announced late on Sunday evening that the election would be held through EVMs. It directed the ECIL to […]

Reiterating that issues around Article 370, i.e., special status to Jammu & Kashmir, were an internal matter, India played down the significance of Friday’s UN Security Council’s “closed consultation” meeting on Kashmir. Indian Ambassador to the UN Syed Akbaruddin accused Pakistan and China of attempting to impart greater significance to the meeting than was warranted. […]