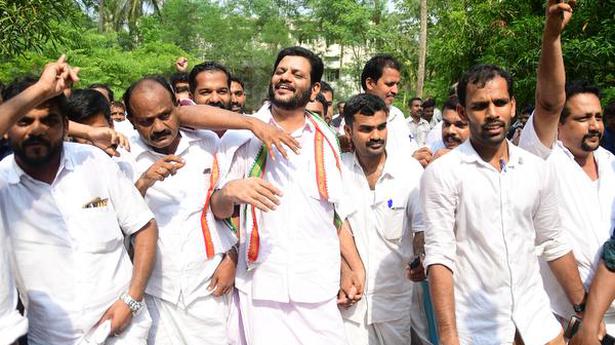 The surprise was writ large on the face of Mr. Sreekantan, who remained uncharacteristically silent for a long time as counting of votes progressed at Aryanet Institute of Technology at Mundur. Throwing all expectations and survey predictions to the winds, Mr. Sreekantan maintained a steady lead till the end.

Although his lead had crossed 27,000 at one stage, it dipped to 11,000 in the last hour of counting, causing tension to the UDF camps. Although the Bharatiya Janata Party’s candidate C. Krishnakumar had led a campaign with big hype, he secured only the third position by polling 2,18,556 votes. When Mr. Sreekantan polled 3,99,274 votes, Mr. Rajesh polled 3,87,637 votes.

The UDF wrested Palakkad back from the LDF after a gap of 25 years. The Palakkad Lok Sabha seat, comprising the Assembly segments of Pattambi, Shoranur, Ottapalam, Kongad, Mannarkkad, Malampuzha, and Palakkad, was widely considered to be an LDF bastion. Mr. Rajesh had won for the second term from here in 2014 by defeating the UDF’s M.P. Veerendrakumar by a margin of more than 1.05 lakh votes. All the surveys held before and after the elections had predicted a thumping win for Mr. Rajesh.

Besides, some surveys had predicted that the UDF would be relegated to the third position. When the LDF maintained lead in Shoranur, Ottappalam, Kongad, and Malampuzha Assembly segments, the UDF outmaneuvered Mr. Rajesh in Pattambi, Palakkad, and Mannarkkad. The huge lead of 29,625 votes in Mannarkkad, in fact, helped Mr. Sreekantan beat Mr. Rajesh by the second thinnest margin in the State. The BJP maintained the third position in all Assembly segments. However, Malampuzha (41,413) and Palakkad (39,963) polled the largest number of votes for the BJP when Mannarkkad (18,560) and Pattambi (20,716) polled the lowest.

Chief Minister Pinarayi Vijayan has said the government will operate fleets of cargo trucks cyclically and on a convoy basis to ensure essential supplies, including food grains, reached the State unimpeded from production centres across the borders. He said here on Friday that traders feared an imminent shortage of supplies if the authorities did not […]

Amid tight security arrangements, the 71st Republic Day was celebrated with traditional fervour and gaiety across the Jammu region on Sunday with Lt Governor G C Murmu unfurling the national flag at the main function in Jammu. This was the first Republic Day after Jammu and Kashmir’s special status was withdrawn on August 5 last […]