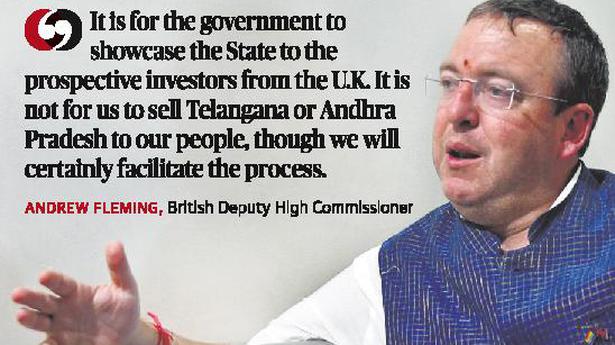 When it comes to having industrial infrastructure such as land, power and water that meets future requirements, the ability to overcome transportation hassles and absorb the ever-growing population, Visakhapatnam and Sri City top the chart in the State.

“In fact, the two are more future ready than other cities,” observes Andrew Fleming, British Deputy High Commissioner to Andhra Pradesh and Telangana.

Dr. Fleming, who was on a two-day tour of the district, visited the Sri City industrial zone on Tuesday and offered prayers at the Sri Venkateswara temple in Tirumala early on Wednesday.

In an informal chat with The Hindu, Dr. Fleming expressed surprise at the “amazing transformation” of the Sri City right from the scratch in 2006 to a sought-after destination, possibly learning from the bad experiences of other cities. However, it still required infrastructure for social life, he added. “On the other hand, Visakhapatnam is a fairly old city, where the people and administrators evince due care for planned development of the city,” he said.

Dr. Fleming, however, pointed out that Sri City and Visakhapatnam should not be bracketed under a single group, as the preference to the two destinations would, by and large, be from the manufacturing and services sectors respectively.

Despite efforts from the Deputy High Commission to showcase the entire Telugu region as a promising industrial destination, the first preference of the U.K. industrial investors continued to be in and around Hyderabad, thanks to the existing industrial ecosystem and ready-made infrastructure, he observed. Referring to opportunities in Andhra Pradesh, Dr. Fleming said the State could do much better by showcasing its industrial zones. “It is for the government to showcase the State to the prospective investors from the U.K. It is not for us to sell Telangana or Andhra Pradesh to our people, though we will certainly facilitate the process,” Dr. Fleming said.

The FinTech Valley project mooted by the previous government in Visakhapatnam did make heads turn, but could not make much headway after the change of regime, he said. “Its resurgence will surely add value to Visakhapatam,” he opined. Dr. Fleming saw a bright scope for collaboration and establishment of British companies in the State in the areas of clean energy, and solid waste and water management.

The Central team which had come to Bagalkot to assess damage due to floods not only witnessed the fury of nature but also heeded the grief of the flood victims on Monday. During its visit to various flood-affected villages in Chikkapadasalagi and Aski villages, the villagers poured their grievances before the team. Since the people […]

Post-graduate medical aspirants from the Maratha community on Monday asked the State government to ensure that their seats were not in jeopardy and threatened to launch a protest if their admissions were cancelled. A delegation also met the Chief Minister and were given a verbal assurance. The Nagpur bench of the Bombay High Court had […]

Restraint on liberties under Section 144 should not be too general, says Supreme Court

Restrictions may be imposed under Section 144 of the Code of Criminal Procedure (CrPC) on personal liberties in the interest of public order, but they should never be “too general”. The Supreme Court’s warning to the government over 50 years ago in Madhu Limaye vs Sub-Divisional Magistrate may play a major role if the imposition […]