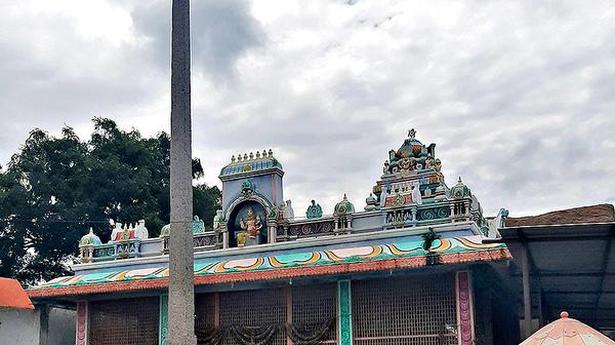 Srigiripally is a village located at Gajwel mandal in the district with a population of about 2,100. One can reach the village after a 10 minutes drive from Pragnapur, the entry point to Gajwel headquarters being represented by Chief Minister K. Chandrasekhar Rao.

On the outskirts of the village, on a hilltop is located the Sri Lakshmi Narasimha Swamy temple. From this point, one can have glimpses of the entire village and the greenery around . This village successfully implemented the village development plan during the 30-day programme by removing debris and old houses which had reached dilapidated condition. About 30 old houses in the village were identified and removed after convincing the owners.

Locals say that the Lakshmi Narasimha Swamy temple dates back to several centuries and on the same timeline of Yadagiri in Bhuvanagiri district and Nachagiri in Medak district.

G. Venkata Narasimha Sharma is the present priest at the temple.

A native of Srigiripally, his grandfather Narasimha Sharma and father Lakshmana Sharma have extended their services at the same temple. He got the responsibility as hereditary.

“The village elders and knowledgeable persons informed us that Yadagiri, Srigiri and Nachagiri are on the same timeline and were constructed facing each other. While the idol at Yadagiri will be west facing, in Nachagiri the idol will be facing South East corner. Here the idol will have a little tilt towards South East. Like in both those places, here also the idol was Swayambhu ( originating from underneath the ground) in a cave. You can see four caves nearby the temple where children play even now,” Mr. Venkata Narasimha Sharma told The Hindu adding that this temple needs support from the government to have a glorious future.

“This temple is located 3 km away from Rajiv Rahadari and has a great potential to become a pilgrim spot. We need government support to develop this temple and request the government to come forward in this regard,” said C. Chandramohan Reddy, sarpanch.

The temple will be hardly one-and-half kilometre away from the ring road being constructed around Gajwel town.

Chief Minister Edappadi K. Palaniswami on Friday urged the general public against stepping out of their houses to shop daily for essential supplies and insisted that they stock supplies for at least a week, during the ongoing COVID-19 lockdown. Mr. Palaniswami said the government would strictly implement the prohibitory orders, since many were not taking […]

Buoyed by a commanding majority in the Lok Sabha and the tactical support from friendly opposition parties in the Rajya Sabha, the Narendra Modi government has been on a legislative overdrive, chasing social goals to ensure sustainable growth is a tad easier. So even though not all measures are backed by budgetary intent, there is […]

Weeks after having been COVID-19-free, Goa reported seven new cases among people who entered the State by road on Wednesday.Chief Minister Dr. Pramod Source: thehindu.com Related