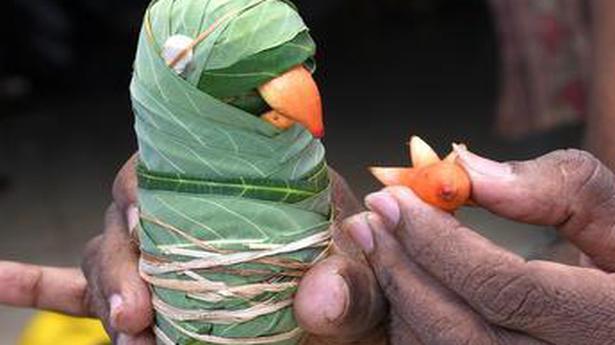 When Srivilliputhur wakes up to the sounds of the Thiruppavai from its many temples, the frail S Raman, 65, walks from his house on West Car Street to the Andal Temple. He spends at least two hours in the the temple garden in the southern prakaram, picking flowers and leaves. He carries them back home to make his precious parrot.

What he creates with his deft fingers is no ordinary parrot. It adorns goddess Andal every evening. “She holds it in her left hand for almost the same duration it takes to make it,” says Raman, who’s the lone parrot maker of the town in Virudhunagar district of Tamil Nadu.

“It is like meditation,” he says, “I take an average of four to five hours to make one parrot.” Earlier, he could do the same job in two hours but with advancing age and weak eyesight, he requires multiple breaks.

“It is by God’s grace that I have been making this offering for 26 years, uninterrupted,” he says. “Not everyone gets such an opportunity,” he says, swelling with pride.

The Bombay High Court on Monday extended till December 6 the interim protection from arrest for professor Anand Teltumbde and writer Gautam Navlakha, who are charged in the Bhima-Koregaon violence case. Advocate Yug Chaudhry told Justice P.D. Naik that the Pune Police filed the affidavit opposing Mr. Navlakha’s anticipatory bail plea on November 26, but […]

22 arrested for smuggling turtles in Bengal

Rohingya wary of future after CAA, don’t want to return to Myanmar

“It was a blessing to wake up every morning and not have to worry whether we will make it through the day,” says 18-year-old Raheema, a Rohingya Muslim, recalling her first few days in India after she fled her home in Myanmar to escape persecution. The “nightmares” that she thought were a thing of past, […]