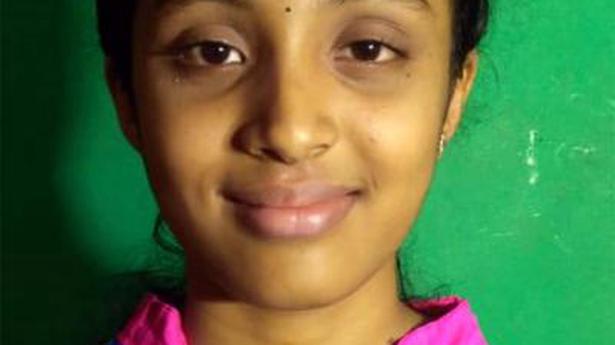 It was a clean sweep for two students who scored full marks (625) in the Secondary School Leaving Certificate (SSLC) examinations 2019, the results of which were announced on Tuesday. Karnataka recorded a pass percentage of 73.7 — an increase of 1.77 percentage points from last year’s 71.93%.

State topper Srujana D., student of St. Philomena English High School, Attibele, Anekal, on the outskirts of Bengaluru, was ecstatic when she got her scores. “Anything can be achieved if you have confidence in yourself. I studied hard and expected marks above 620. A State rank was definite, but getting first was a bonus,” she said.

Srujana wants to pursue physics, chemistry, mathematics, and biology and aims to become a doctor.

The other topper — Naganjali Parameshwar Naika, a student of Colaba Vithob Shanbhag Kalbagkar High School, Kumta in Uttara Kannada — said not repeating mistakes she made during preparatory exams helped.

Her school conducted five preparatory exams. “Due to mistakes in grammar, I lost marks. I lost six marks in Sanskrit, English and Kannada in the prep exam. My teachers pointed out the mistakes and I did not repeat them in the final exam,” said Naganjali. She, too, plans to pursue a career in medicine.

Naganjali is the daughter of Parameshwara Naika, who was with the Border Security Force for two decades. He now owns and drives a passenger tempo. “I left the tempo midway and rushed to celebrate the success of my daughter,” he said.

Srujana, the older of two siblings, said she started working for the final exams from the first day of class. She scored consistently in all her tests and made it a point to revise what was taught in class the same day. She admitted that extracurricular activities such as dancing took a back seat and that her only means of relaxation was sleep. “But I was not stressed about the exams, and I knew my hard work would pay off. Concentration and hard work is key,” she said.

Senior Akali leader Bikram Singh Majithia on Friday said that Congress candidates will bite the dust in Lok Sabha poll in Punjab. Mr. Majithia added that several Ministers will be axed and many legislators will not get party tickets if Punjab Chief Minister Amarinder Singh’s “diktat” is implemented in letter and spirit. “The face of […]

A 30-year-old woman has set her two children, aged 4 and 5, ablaze after a heated argument with her husband. The incident occurred in Yemmiganur, Kurnool district, at around 6 a.m. on Wednesday. The two children have suffered burns on their legs and abdomen. They were first taken to Yemmiganur hospital for first aid and […]