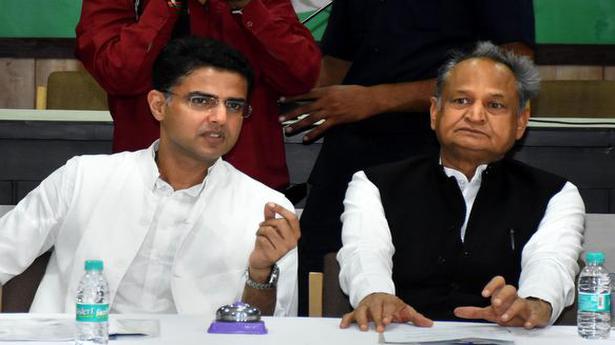 A triangular contest is on the cards among the ruling Congress, Opposition BJP and the Rashtriya Loktantrik Party in two Jat-dominated Assembly seats of Mandawa and Khivsar in Rajasthan where bypolls will be held on October 21.

Twelve candidates — 9 in Mandawa and 3 in Khivsar, are in the fray.

The bypolls were necessitated after Khivsar (Nagaur) MLA Hanuman Beniwal and Mandava (Jhunjhunu) MLA (BJP) Narendra Kumar were elected to Lok Sabha in May this year.

The bypolls will be third test for the Congress which came to power in December 2018 but lost all the 25 Lok Sabha seats in the general elections in May 2019.

However, in June, the party won majority of seats in Panchayat Samiti and Zila Parishad bypolls held in 26 out of total 33 districts in the state.

The Congress has fielded former MLAs Rita Chaudhary, who is the daughter of late Congress leader Ramnarayan Chaudhary, in Mandawa and Harendra Mirdha, former Minister who comes from influential Mirdha family, in Khivsar.

The BJP has given ticket to Sushila Sigra in Mandawa hours after her induction in the party and contesting the bypolls on Khivsar in alliance with MP Hanuman Beniwal’s Rashtriya Loktantrik Party in Khivsar in order to make its position stronger against the Congress.

We are prepared for the by-elections and will win both the seats with a huge margin, Mr. Pilot said.

He said when the Congress was in Opposition for five years, it had won all bypolls and now that the party is in ruling there is no reason for not winning the elections.

The bypolls will be the first test of the recently appointed State president of BJP, Satish Poonia, who is from the Jat community.

People have seen the rule of Congress and they are totally disappointed. The Congress failed to deliver on its promises and has betrayed people on promises it made in the election manifesto last year, Mr. Poonia said.

Mr. Hanuman Beniwal also campaigned in Khivsar, where his brother Narayan Beniwal is contesting election as the alliance candidate.

259 polling booths have been set up in Mandawa where 2,27,414 voters are eligible to exercise their franchise whereas in Khivsar, 2,50,155 people will cast their votes in 266 booths.

Sixty polling stations in Mandawa and 121 in Khivsar have been identified as sensitive.

Eight companies of Central security force have been deployed in each of the poll-bound constituencies, Chief Electoral Officer Anand Kumar said.

Polling will be held from 7 a.m. to 6 p.m. and counting of votes will take place on October 24.

In Rajasthan, of the 200 Assembly seats, the Congress has 106 MLAs, including the six who defected to the party from the BSP last month.

The BJP has 72 MLAs, CPI (M), Rashtriya Loktantrik Party (RLP) and Bhartiya Tribal Party (BTP) have two each and Rashtriya Lok Dal (RLD), also an ally of the Congress, has one MLA and 13 are independent MLAs.