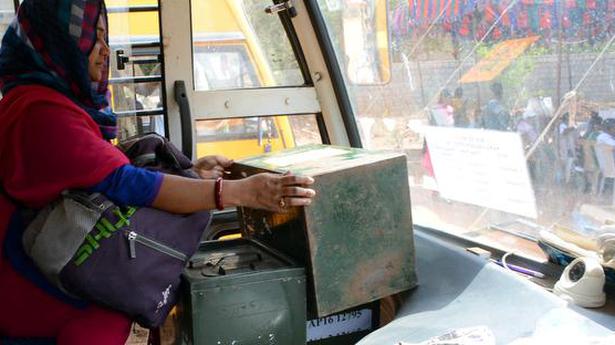 The stage is all set for the elections to the mandal and zilla parishad territorial constituencies across the State.

In all, elections will be held for 197 ZPTCs and 2,166 MPTCs in the first of the three-phased election on Monday. Elections to these rural local bodies are being held for the first time since the formation of Telangana in June 2014.

The Bharatiya Janata Party (BJP) too had fielded a significant number of 171 candidates in the ZPTC polls.

In respect of the MPTCs, elections are being held for the 2,166 seats with a total of 7,072 candidates in the fray, putting the average number of contestants for each seat little over 3.

Telangana State Election Commission has declared 69 MPTCs and two ZPTC candidates as unanimously elected after the returning officers and district-level officials were satisfied that these candidates were the sole contestants from the respective seats.

The election body had also declared 63 MPTCs and one ZPTC contesting in the second phase as unanimously elected.

The election authority is using the ballot paper for voting which would be held between 7 a.m. and 5 p.m. while it would be between 7 a.m. and 4 p.m. in five districts — Bhadradri Kothagudem, Jayashankar Bhupalpally, Mancherial, Mulug and Kumram Bheem Asifabad districts — which have been identified as left wing extremism dominated areas. The change in the timing for poll in these areas had been made in consultation with the district election officials as well as the superintendents of police concerned.

The election to Gaggallapally MPTC in Nagarkurnool had been put on hold after the allegations that an opposition candidate was offered cash to withdraw from the contest. The election authority had announced that fresh dates for the conduct of the election would be notified subsequently.

Bommai asks Muslims not to fall for smear campaign of Congress

Reiterating that the Citizenship Amendment Act (CAA) will not affect Muslims, Home Minister Basavaraj Bommai on Tuesday asked Muslims not to fall for the smear campaign by Opposition parties, especially the Congress. Launching the signature campaign in support of CAA at Suratkal, Mr. Bommai said there will be no trouble for any Muslim from the […]

With citizens, lawyers and even politicians joining the clamour for the closure of Khed-Shivapur toll plaza on the long-pending Pune-Satara national highway, a Thane-based lawyer-activist Praveen Wategaonkar, along with Sanjay Shirodkar, a Pune-based activist, have filed a complaint with the CBI against P.S. Toll Road Private Ltd — a special purpose vehicle promoted by Reliance […]

A pat for Mysuru rly. station