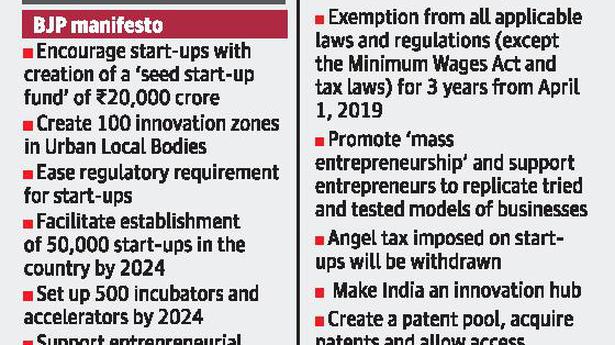 As lack of jobs has become an issue in this general elections, both the national parties, the BJP and the Congress, are focusing on start-ups in their election manifestos.

While the BJP has promised to dole out collateral-free credit of up to ₹50 lakh, the Congress has made a promise to abolish angel tax introduced in 2012.

The Hindu spoke to a few start-up entrepreneurs and sought their views on the promises made.

Surya Shastry, MD, Phalada Pure & Sure, which deals with a range of certified organic food products and organic supply chain, said, “Start-up initiatives by Prime Minister Narendra Modi looked great on paper but challenges such as data protection and angel tax proved hefty for the entrepreneurs.”

Appreciating several points made in the Congress manifesto, he welcomed promises on removal of angel tax and tax credits to new businesses and also an all-round business support to entrepreneurs which might be highly beneficial.

Mr. Shastry said, “A full support from the government might make it better for entrepreneurs and start-ups in 2019. We need to wait and watch to see how well start-ups will be benefited.”

Rachita Bhonsle, who operates Camper Trails, a Bengaluru-based start-up in tourism business, has different view. She said, “When political parties are thinking of doles which do not create jobs or entrepreneurs and burdens the state exchequer, only those who think of income-generation activities are looking at a larger good of the country.”

On creation of jobs, Ms. Bhonsle said, “If the country has to address the issue of unemployment, governments have to invest hugely in creating an ecosystem for start-ups, MSMEs, etc. We need progressive and decision-oriented government and certainly polls matter.”

Aprameya Vokal, founder of Vokal, one of the vernacular interest-based knowledge-sharing platform, said the Central government should acknowledge the fact that start-ups are job creators and encourage more entrepreneurship. “Lower tax rates for those who set up a start-up is a way of showing that appreciation rather than implementing things like angel tax,” he said.

Hours after the CBI filed a chargesheet accusing former Finance Minister P. Chidambaram of corruption, Prime Minister Narendra Modi warned of a similar fate to other Opposition leaders responsible for the “banking and economic mess”. Mr. Modi was addressing his last electoral rally in the financial capital on Friday. “For 10 years those who destroyed […]

With the 6.5 per cent votes that his party bagged in the 2009 and 2014 Lok Sabha polls, Lok Janshakti Party chief Ram Vilas Paswan has emerged as one of the foremost Dalit faces in Bihar politics. The past 32 years have seen him contest 11 polls, winning nine of them. This time, however, Paswan […]

Ramachandran Kadannappally, Minister of Ports and Archaeology and Museum, on Friday instructed the authorities concerned to complete the construction of Mar Sebastian Vallopilly Memorial Migration Museum at Chempanthotty in Sreekandapuram in a time-bound manner. The instruction was issued at a meeting chaired by the Minister in Thiruvananthapuram. KITCO, a construction consultancy, was asked to complete […]