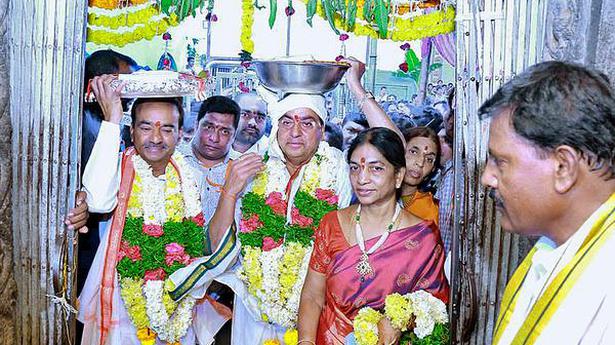 The Mahasivaratri festival was celebrated with religious fervour at the historic Sri Raja Rajeshwara Swamy Devasthanam in Vemulawada here on Monday.

Since Sunday, devotees from various parts of the State as well as neighbouring states including Maharashtra have been pouring into the temple town to offer prayers on the auspicious occasion. Early on Monday, they started with taking a dip in the holy tank (dharmagundam) and formed serpentine queues to offer prayers and participate in the traditional ritual of ‘kode mokku’ (tying of ox) at the shrine.

Following surge of pilgrims, temple authorities allowed only ‘laghu darsan’, but even that took not less than two hours for each one in queue. To ensure smooth movement of devotees, the authorities provided drinking water facilities and also distributed snacks.

In keeping with the age-old tradition, priests from the Tirumala Tirupathi Devasthanam led by Dollar Seshadhri and Joint Executive Officer K.S. Srinivasa Raju arrived from Tirumala and presented silk vastrams to the presiding deities here.

Collector P. Venkatram Reddy and Joint Collector Yasmeen Basha are camping in the temple town and overseeing all arrangements for the mega fete.

The Kethaki Sangameswara temple at Jarasangam also saw devotees coming in from far and wide, including from Karnataka and Maharasthtra. Lok Sabha member B.B. Patil visited the temple.

Siva temples in the undivided district reverberated with ‘Sivanama smarana’ as thousands of devotees turned up to offer prayers.

Temple committees made necessary arrangements including drinking water and shade for devotees. The RTC plied special buses to temples of significance.

Collector M. Ram Mohan Rao, along with his family members, offered prayers at Sidhulagutta. Tollywood actor Ramcharan, his wife Upasana and Kamineni royal family members were expected to offer prayers at Shivarama temple inside Gadikota (fort) at Domakonda at night.

Senior dignitaries from both the countries are expected to flag off the handover, which will be conducted via video conferencing, according to a statement. Source: thehindu.com Related

Starting with an open data platform for the 100 cities that are a part of its Smart Cities Mission by 2020, the government is planning to make a wide range of data — from health, education, finances to social aspects — of all 4,041 urban local bodies public by 2024 and eventually monetising it. Union […]

The State government will not allow women in the menstruating age group to the Sabarimala Ayyappa temple and instead wait till a seven-member Bench of the Supreme Court takes a final call on a batch of review petitions referred to it for final scrutiny. The government veered round to this view on Friday on the strength of […]