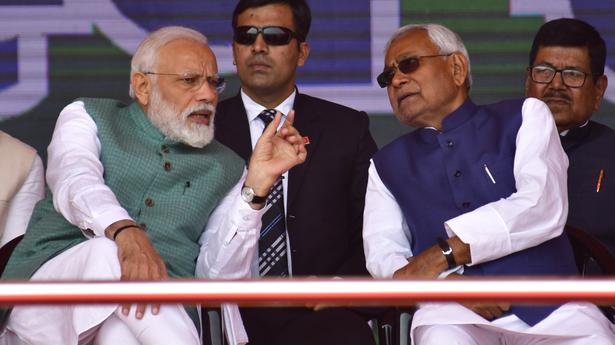 Hitting out at Opposition parties for questioning the recent air strike in Pakistan, Prime Minister Narendra Modi on Sunday said, “Instead of boosting the morale of our armed forces, some people are asking for proof of the strike.”

He was addressing the NDA’s sankalp rally at the Gandhi Maidan in Patna.

“We are proud of our armed forces, but some people in our country are making statements which have brought smiles on our enemy’s faces,” he said.

“But, your chowkidar is standing rock solid before them for the security of the country and protecting the interests of the poor people,” he said.

He said, “The new India that is surging ahead will not sit silent over the martyrdom of its brave soldiers. It will take revenge point by point.”

Leaders of the BJP, JD(U) and Lok Janshakti Party were present on the dias along with the Prime Minister.

Mr. Modi said, “For the first time in 50 years, India was recently invited to the Islamic countries conference,” and “its voice was heard with respect.

“The Crown Prince of Saudi Arabia too had come here and he increased the quota of Haj pilgrims to 2 lakh for Indian Muslims on my request. He also declared the release of 850 Indian prisoners arrested in his country on flimsy charges,” he said.

“This reflects another example of our respect in world community, but it also reflects what Congress was doing when it ruled the country,” he added further.

While slamming the Opposition parties for coming together to contest him, Mr. Modi said, “My priority is to appeal people to come to end terrorism but they say come to finish Modi; I say come to end poverty, corruption, black money, malnutrition, unemployment and fight for cleanliness but they [Opposition] are cobbling together to fight Modi,” he said.

“But the people of the country have decided to punish them once again,” he added.

“Every year, ₹75,000 crore will be given directly to the bank accounts of farmers of the country,” Mr. Modi said, addressing the issue of farmers distress.

He further listed several achievements of his government and programmes initiated for development in Bihar. He also thanked Bihar chief minister Nitish Kumar for “giving new direction to Bihar and taking it out from those dark days”.

“Today Bihar has got a better atmosphere for business activity,” he said.

Mr. Kumar thanked Mr. Modi for helping Bihar with several schemes and welfare measures. Mr. Kumar and Mr. Modi are sharing the dias after nine years. In 2010, they addressed an NDA rally together in Ludhiana, Punjab.

The State NDA leaders claimed it as a “historic rally” in the political history of Bihar as over five lakh people were in attendance.

This is the first time that the single-day spike crossed the 7,000 mark. Source: thehindu.com Related

Lieutenant Governor Kiran Bedi has once again come out in fulsome praise of Prime Minister NarendraModi and policies of his government.Minutes after M Source: thehindu.com Related