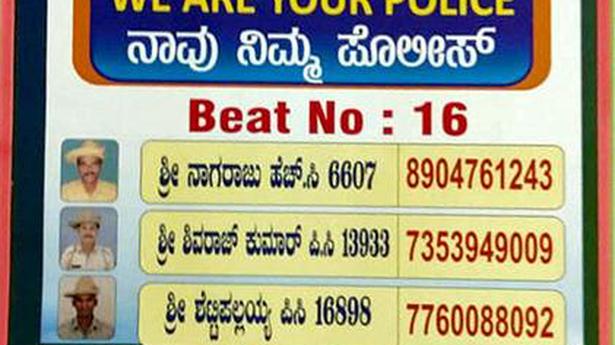 Reporting an incident or filing a complaint with the police can be a hassle. In an effort to boost citizen-centric policing, south division police have come up with a novel idea of printing 10,000 stickers bearing details of the neighbourhood beat police.

The stickers, to be glued at nooks and corners of the jurisdiction, are aimed at helping residents know about the beat police operating on their street and communicate with him in case of an emergency.

“This also helps the policemen concerned to become an integral part of the community and have a sense of commitment to his beat,” Rohini Katoch Sepat (DCP, South) told The Hindu.

Details of women beat police personnel have not been put up though, to avoid the eventuality of harassment, which has been witnessed before, she said.

The move is also expected to help the police. According to a senior police officer, any given police station, on an average, gets hundreds of complaints which are not so serious in nature. “Resolving each and every complaint is tedious and time consuming. However, if the residents call the beat policeman in charge, he could resolve the issue on the spot with little effort, the officer said.

“This will also help the policemen bond with residents of his beat. This exercise would also help policemen strengthen the local intelligence network, which could yield grass-roots-level information for proactive and effective policing,” Ms. Sepat added.

Citizens welcomed the initiative. “It is more time-consuming to call the control room and wait to be connected to the correct station or policeman. This will help us call the right person at the right time,” said Ravi Rao, a resident of K.R. Road.

The Aligarh Muslim University Students’ Union (2018-19) has strongly condemned the brutalities committed against the students of Jawaharlal Nehru University on Sunday night. Describing it as an act committed by “the masked goons affiliated to ABVP having the patronage of the Union Government,” the statement said, “the visuals and media reports describing the hostage-like situation […]

One killed, six injured as bus hits divider in Deevanur

One person was killed and six others sustained injuries when the bus in which they were travelling met with an accident in Deevanur near Tindivanam on Friday. The deceased was identified as S. Gowri Shankar Rao, 25, of Vizianagaram in Andhra Pradesh. Police said the bus was carrying 30 Ayappa devotees from Andhra Pradesh. The […]