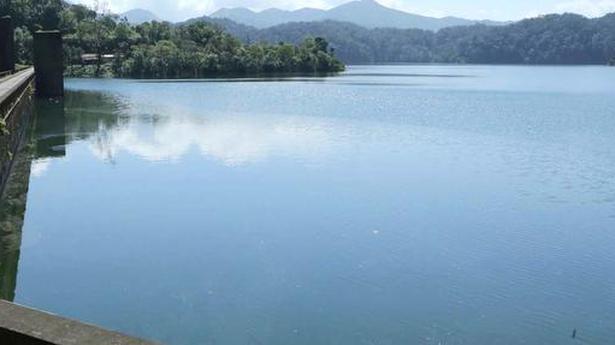 The reservoirs of the Sabarigiri hydro-electric project of the Kerala State Electricity Board have recorded fairly good inflow from the catchment areas during the past 24 hours that ended at 8 a.m on Wednesday, according to board sources at Moozhiyar.

The storage position in the Kakki-Anathodu twin reservoirs of the Sabarigiri hydro-electric project has gone up to 74.22% on Wednesday morning.

This is a remarkable improvement in the storage position of the reservoirs of the Sabarigiri hydro-electric project, State’s second largest one of its kind, against its grim storage of 29.6% on August 19. It should also be recalled that the Kakki-Anathodu and the Kochu Pampa reservoirs had registered a cumulative storage of 97 % during the post-deluge scenario in September last.

The catchment areas of the Sabarigiri received very good rainfall over the past two weeks, leading to very good inflow into the reservoirs, KSEB sources said.

The catchment areas of the Kakki-Anathodu reservoirs have received 24 mm rainfall and that of the Kochu-Pampa dam 12 mm in the past 24 hours, official sources said.

The Kakki-Anathodu reservoir has got an effective storage of 329.525 million cubic metres of water as on Wednesday morning which could generate 856.467 million units of electricity, official sources said.

The rain gauge installed at the collectorate premises has recorded 2.82 mm rainfall in Pathanamthitta town limits.

The water level in the Moozhiyar dam of the 50 mw Kakkad hydro-electric project at Seethathode too has gone up, considerably improving its storage position on Wednesday.

The barrage of the Water Resources Department in river Kakkattar at Maniyar too turned full by Tuesday evening owing to heavy inflow.

Come Sunday and the Bharatiya Janata Party (BJP) is likely to witness a ‘mega recruitment’ of leaders from the Congress, Nationalist Congress Party (NCP) and other parties at a rally in Solapur, in the presence of party president Amit Shah. Among the top leaders who are likely to join the BJP include former chief minister […]

Those looking for a career in luxury brand management need good communication, presentation and interpersonal skills. With India now home to several international luxury fashion, lifestyle and technology labels, luxury brand management is an emerging new-age career. Selling an idea Managing luxury brands requires an understanding of the strategies of premium segments. Those interested could […]