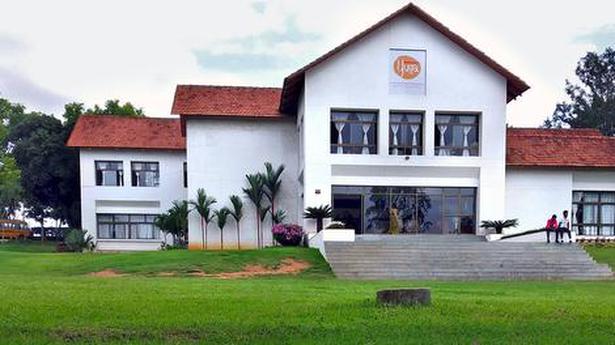 Thousands thronged the premises of Coffee Day Global Ltd. in Chikkamagaluru town and paid their last respects to founder V.G. Siddhartha, before the body was taken for cremation. The district saw him as a man from the region who made them proud and made the coffee here famous the world over.

Students of an institute on the outskirts of the same town were also in grief. Siddhartha not only gave brand value to Karnataka’s coffee, but also offered free training to many rural youths in the hospitality industry at Yuva Institute, an initiative of SVGH Trust managed by Siddhartha located at a sprawling campus in Muguthihalli on the outskirts of Chikkamagaluru.

The institute offered one-year certificate course in hospitality management, culinary skills and commercial operations in the hospitality sector. Apart from free education, food and accommodation, ₹1,750 is paid per month as stipend.

Neelesh, a faculty member told The Hindu that students are given six months on-job training at Cafe Coffee Day outlets during the course.

On completion of the course, students can join the outlets as full-time employees. The institute was established in 2004 and as many as 400 youths, a major chunk of whom are from rural areas, are trained every year.

Paying his condolences, Dinesh L.G., resident of Aigala Basapura village in Ballari district who is pursuing the course, said the education is free of cost and is a boon for youths from low-income groups. Training in English language, etiquette and life skills are offered here.

Palangappa, a student from a village near Kushalnagar in Kodagu district, said the training helped youths overcome inferiority complex and instil confidence in them to carve a lucrative career in the corporate sector. Mr. Palangappa said he planned to start his own cafe after completion of the course.

Among those who paid their last respects was U.T. Khader, Mangaluru MLA, who was present during the operation to trace Siddhartha’s body in Nethravati river in Mangaluru.

West Bengal Governor Jagdeep Dhankhar and Chief Minister Mamata Banerjee on Wednesday condemned the killings of five workers from the State’s Murshidabad district in Jammu and Kashmir. Extending his condolences, Mr. Dhankhar appealed to the State government and NGOs to help the kin of the deceased. “@MamataOfficial. In deep pain and sadness, I condemn the […]

Prime Minister Narendra Modi on Sunday launched a scathing attack on West Bengal Chief Minister Mamata Banerjee and said the ground beneath her feet was shaking. “The ‘speed breaker’ Didi of Bengal is unable to sleep, she is venting all her anger on her officials and the Election Commission. If someone wants to understand what […]

The Raulathul Uloom Association (RUA) has published a souvenir on U. Mohammed, former principal of Farook College and well known educationalist. ‘Colossal’ Releasing the souvenir titled Campusinte Swantham UM at a function held at Farook College on Thursday, E.T. Mohammed Basheer, MP, said Mohammed’s contributions to the educational uplift of minorities in the State were […]