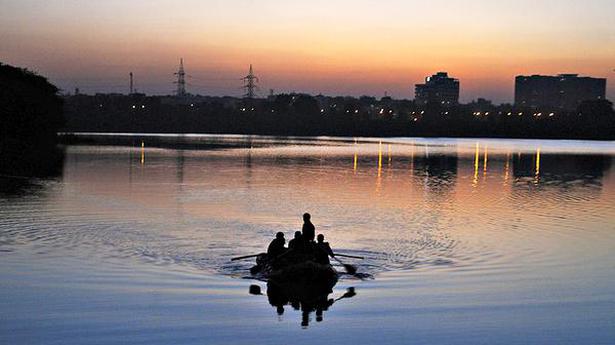 The High Court of Karnataka on Tuesday directed the State government to produce the offer made to the Infosys Foundation to rejuvenate and maintain Hebbal lake in Mysuru while observing that perhaps the government would have got better offers if it had issued public notice inviting corporate entities to come forward to assist in taking care of State’s lakes.

Even if the law permits allowing corporate entities to maintain lakes, the process of allowing their participation must be fair and transparent, the court said, while directing the government to produce the process followed before entering into Memorandum of Understanding (MoU).

A Division Bench comprising Chief Justice Abhay Shreeniwas Oka and Justice S. Vishwajith Shetty issued the directions during the hearing of a batch of PIL petitions related to lakes and stormwater drains.

The court, in March, had restrained the government from signing more MoUs while observing that prima facie, by way of the MoUs, the government wants to shift its obligation to corporate entities. The government had told the HC that it had signed an MoU with Infosys Foundation for Hebbal lake in Mysuru in 2016; and five more MoUs were signed between 2017 and 2020 with Bharat Electronics Ltd., Biocon Foundation, Titan Company Ltd., Say Trees Environmental Trust and CMR University for rejuvenating and maintaining Doddabommasandra, Hebbagodi, Veerasandra, Nallurahalli and Chagalatti lakes in the city, respectively.

Asking whether any public notices were issued inviting proposal for lake maintenance from corporate entities, the Bench asked whether the works entrusted in the MoU are permissible as per the report, submitted by a committee headed by Justice N.K. Patil, a then judge of the High Court, which was approved by the High Court in 2012.

Observing that it is the duty of the State government to stop those works not permitted as per the 2012 order of the High Court based in Justice Patil Committee Report, the Bench directed the government to submit the details of extent of works carried out and whether the corporate entities have complied with the terms of the MoU.

The Bench also asked the State government and the Bruhat Bangalore Mahanagara Palike to make their stand clear on whether corporate entities are in possession of the lakes besides clarifying whether any officers has been nominated to ensure that they adhere to terms.

‘Bring back stranded fishermen from Somalia’

The Madurai Bench of the Madras High Court on Friday ordered notice to the Centre and the State governments in a habeas corpus petition that sought a Source: thehindu.com Related

Two persons, distant relatives of a COVID-19 victim – a 70-year-old woman from Gauribidanur in Karnataka – who tested positive on Tuesday have been quarantined along with other close relatives. While the first COVID-19 positive person from Anantapur is a 10-year-old boy from Lepakshi, the second is a 30-year-old woman from Hindupur. Confirming this, District […]