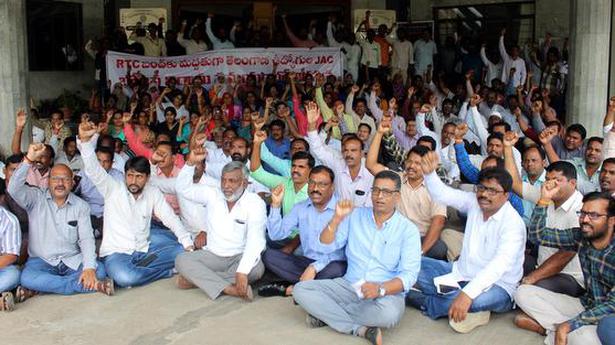 The bandh called by the TSRTC-JAC was complete and successful with people from all sections of society voluntarily extending their suppoort. Revenue officials have also extended support by holding lunch hour demonstration.

Heavy police force was mobilised to prevent any untoward incident. Several leaders were arrested by the police. Congress MLA T. Jayaprakash Reddy was kept under house arrest till evening. Since morning, leaders of several parties arrived the bus depots and stopped buses from leaving the depots.

BJP leaders came in three phases and held protest. One of the BJP leaders symbolically presented sari, bangles and kumkum to Chief Minister K Chandrasekhar Rao for failing to address the demands of RTC employees for the past two weeks. Arrested leaders were shifted to Indrakaran and other police stations.

Speaking to reporters, Mr. Jayaprakash Reddy said that Mr. Chandrasekhar Rao has been behaving like a dictator and agitation would be intensified if the government fails to address the demands of the RTC employees and added that the Congress would extend all support to the agitation.

Medak district RTC JAC convenor P. Srinivas Reddy said that the bandh was complete and successful and every section cooperated for the success

At Gajwel several activists of the JAC were arrested and released later in the evening.

Primary and Secondary Education Minister S. Suresh Kumar on Tuesday said that the government was hoping to conduct SSLC exam during the second or thi Source: thehindu.com Related