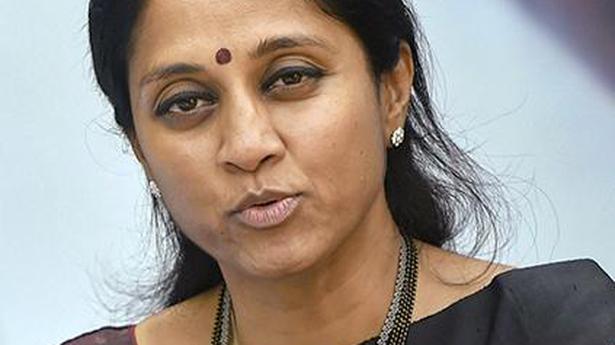 Nationalist Congress Party MP Supriya Sule alleged harassment by a taxi driver when she arrived at the Dadar railway terminus here on Thursday.

Ms. Sule, who lodged a complaint with the Railway Protection Force (RPF), said the driver, Kuljeet Singh Malhotra, entered her railway compartment and blocked her way while asking if she needed a taxi.

Even when she made it clear that she did not need one, he “blocked my path, harassed me and shamelessly even posed for photo”, Ms. Sule, daughter of NCP chief Sharad Pawar, tweeted.

She clicked his photo so as to file a complaint, she said.

The RPF authorities later informed her that he had been apprehended and fined, she added.

‘No touting at stations’

“If touting is permitted under the law, then it can not and should not be permitted within train stations or airport but only at designated taxi stands,” the Baramati MP said.

The taxi driver was apprehended and booked under Sections 145-B (creating nuisance and indecency), 147 (entering in railway premises unlawfully) and 159 (showing rash and negligent manner) of the Indian Railway Act, 1989, said a senior railway official.

K.K. Ashraf, Senior Divisional Commissioner of the Mumbai division of Central Railway, said that Kuljeet was also fined ₹260 for not possessing a valid ticket.

Further, city traffic police imposed a fine of ₹200 on him for not having a licence and another ₹200 for driving a taxi without uniform, Mr. Ashraf informed.

Mumbai civil and sessions court gives anticipatory bail to two others who are in quarantine Source: thehindu.com Related

Tiger or no tiger, villagers will defecate in the open fields

Villagers of Tamsi (K) in Bheempur mandal of Adilabad district managed to maintain an inscrutable countenance when, on February 17, the Field Director, Kawal Tiger Reserve, C.P. Vinod Kumar asked them to shun open defecation to prevent a possible encounter with a tigress moving in the area. They, however, could not hold themselves back once […]

Jagan has undone all of Naidu’s good work: TDP