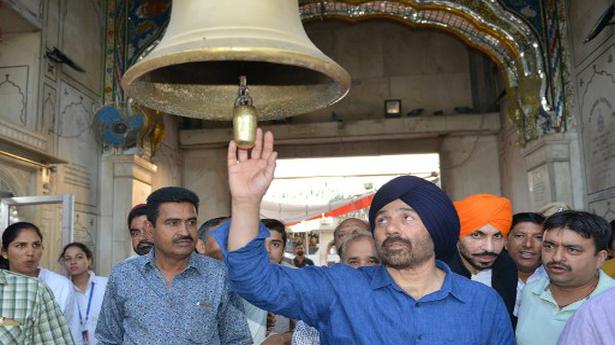 Actor and BJP candidate Sunny Deol on Monday filed his nomination papers from the Gurdaspur Lok Sabha seat in Punjab.

After paying obeisance at the Golden Temple and Durgiana Temple in Amritsar in the morning, Mr. Deol filed his nomination in Gurdaspur.

He was accompanied by his brother and actor Bobby Deol.

Mr. Deol will be addressing a rally at PUDA ground in Gurdaspur later in the day. Senior leadership of BJP and SAD will also be present in the rally. After the rally, he is set to leave for Mumbai to vote.

In a tweet, veteran actor Dharmendra sought support of the people for the victory of his son Sunny Deol from Gurdaspur seat. “We seek your support Support us it will be your victory. It (victory) will be of brothers of sisters of my Punjab. It (victory) will of India’s beautiful part of Gurdaspur,” he tweeted.

Earlier in the morning, Mr. Deol paid obeisance at the Golden Temple in Amritsar before filling his nomination papers.

Currently, the Gurdaspur constituency is represented by Congress MP Sunil Jakhar, who won the seat in the 2017 bypoll that was necessitated after the death of Vinod Khanna in April that year.

Mr. Jakhar had defeated BJP candidate Swaran Salaria by a whopping margin of 1,93,219.

Incumbent MLAs double their assets, Bonda among the richest in Krishna

A majority of the incumbent elected representatives contesting the Assembly and Parliamentary elections in Krishna district have apparently become richer. The worth of their total family assets increased due to the addition of new movable or immovable properties and an increase in market value in the past five years. As many as 16 candidates, who […]