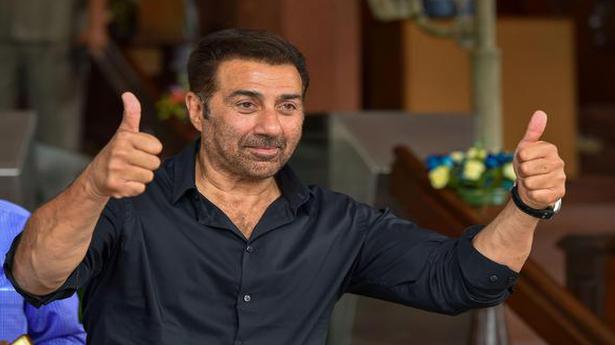 Film actor and Gurdaspur MP Sunny Deol has been asked to explain his poll expenditure during the recent Lok Sabha elections after it was found to have crossed the statutory limit of ₹70 lakh, an official said Wednesday.

The notice to Mr. Deol to “reconcile” his poll expenditure account was issued by Gurdaspur District Election Officer-cum-Deputy Commissioner Vipul Ujjwal. His poll expenditure was found to be more than ₹70 lakh limit, Mr. Ujjwal said.

Mr. Deol was elected MP from Gurdaspur Lok Sabha seat. He defeated Congress nominee Sunil Jakhar with a margin of 82,459 votes. Though Mr. Ujjwal refused to comment on the election expenditure figure, official sources said as per preliminary calculations, Mr. Deol’s poll expenditure was found to be ₹86 lakh.

It is too early to comment on the overspending right now, added Mr. Ujjwal. For Lok Sabha candidates, the statutory poll expenditure limit has been fixed at ₹70 lakh. Mr. Deol’s poll expenditure was found to be in excess of the limit among all other candidates in the Gurdaspur Lok Sabha constituency, officials said.

Earlier on May 15, the Election Commission had issued directions for adding ₹1.74 lakh to Mr. Deol’s poll expenditure after he failed to respond to its query about a Facebook page being run in his support. The order had come on a complaint by the Punjab Congress, which claimed the Facebook page, ‘Fans of Sunny Deol’, was being run without any prior permission of the poll watchdog.

Rebel BJP MP from Patna Sahib Shatrughan Sinha joined the Congress on Saturday. He will contest the Lok Sabha election from the seat against BJP candidate and Union Minister Ravi Shankar Prasad. The two-term MP said he left the BJP, on its foundation day [Saturday], with “immense pain and a heavy heart”. Slamming the party […]

Adventure sports back to add excitement to Dasara festivities

Adventure sports are part of Dasara festivities this year once more with a slew of adrenaline-pumping events on the line-up. While water sports at Varuna lake on the outskirts are a regular affair and often promoted during Dasara with special discount packages, it is managed by a private enterprise. Hence, the organising committee decided to […]

In a letter to Prime Minister Narendra Modi, All India Kisan Sabha and All India Agricultural Workers’ Union have demanded declaration of harvesting of crops as an essential service, facilitating farmers with free harvesting equipment and allowing agricultural labours to travel. The Kerala government has already taken these measures. The two unions affiliated to the […]