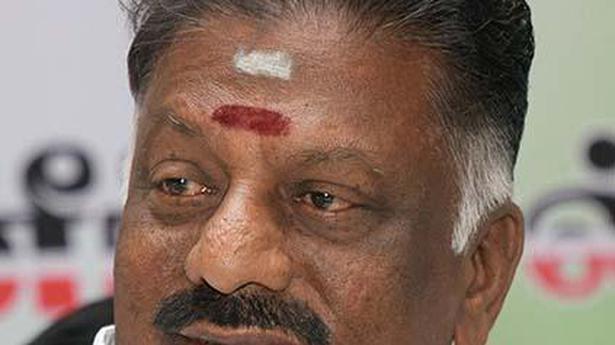 The Supreme Court on Tuesday expressed strong reservations about appropriating the power conferred exclusively on the Tamil Nadu Assembly Speaker under the anti-defection law to conduct disqualification proceedings against Deputy Chief Minister O. Panneerselvam and 10 other AIADMK MLAs for voting against the confidence motion moved by Chief Minister Edapadi Palaniswami in February 2017.

Mr. Sibal appears for DMK leader R. Sakkarapani, who has appealed an April 2018 order of the Madras High Court.

In its 57-page order, the High Court held that it cannot, merely on the basis of a writ petition under Article 226, encroach on the Speaker’s powers under the Tenth Schedule. It reasoned that it was “difficult to conceive how this court can disqualify the concerned MLAs… Passing of such orders would only not amount to judicial overreach, it would also amount to gross breach of judicial discipline, if not contempt.”

The High Court further refrained from passing any orders on the prayer made by Mr. Sakkarapani to issue a mandamus to the Speaker to disqualify the 11 AIADMK legislators under the anti-defection law. It said the legal question of whether a court can direct a Speaker to disqualify members was pending consideration before the apex court.

Mr. Sibal on Tuesday submitted that if the Speaker had abandoned his duty under the Tenth Schedule, the court should now take over. “If the Speaker, who has the power, does not decide on the disqualification, the court will have to,” he argued.

But senior advocate Mukul Rohatgi, for the Speaker, raised a preliminary objection to Mr. Sibal’s arguments. He submitted that Mr. Sakkarapani’s original prayer before the High Court was to issue a mandamus to the Speaker to decide the disqualification of the MLAs. This prayer was eventually abandoned when the apex court decided to examine the legal question itself and directed the High Court to not take up the prayer.

Though the apex court gave Mr. Sakkarapani leave to amend his prayer before the High Court, Mr. Rohatgi said, such an application for an amended prayer was not filed or “proceeded with.” Hence, Mr. Rohatgi said, this appeal now was infructuous.

Justice Bobde asked the parties to seek a clarification before the High Court itself, but Mr. Sibal again protested. He said an amendment application cannot be clarified when the April order had answered the amended prayer. It was now up to the Supreme Court to hear and decide this appeal, he said.

Finally, the court adjourned the hearing.

Mr. Sakkarapani’s petition said the 11 MLAs from the Panneerselvam faction voted against the trust vote. The plea for their disqualification was made before the Speaker under Paragraph 2 (1)(b) of the Tenth Schedule. However, the Speaker did not issue any notice on the disqualification petition.

Meanwhile, the apex court allowed three AIADMK MLAs to withdraw their challenge against proceedings initiated by the Speaker for their disqualification for “anti-party activities” by supporting rival T.T.V. Dhinakaran. Their counsel said they have returned to the AIADMK fold and the petition was infructuous.

The Speaker had issued a notice to the three “dissident” MLAs, E. Rathinasabapathy, V.T Kalaiselvan and V.T Prabhu for supporting Mr. Dhinakaran, who along with V.K. Sasikala floated their own outfit following the death of Jayalalithaa on December 5, 2016.

As many as 27 FIRs have been lodged against Samajwadi Party leader and Lok Sabha MP Azam Khan in the last one month on the allegation that he grabbed farmers’ land for his university in Rampur, police said. Khan, who was a cabinet minister in Uttar Pradesh during the Akhilesh Yadav-led regime, is the founder […]

‘26/11 would have been called Hindu terror attack’, says Rakesh Maria

Former Mumbai Commissioner Rakesh Maria has said that had Pakistani terrorist Mohammed Ajmal Kasab not been caught alive, the 26/11 Mumbai terror attack would have been dubbed as the handiwork of “Hindu” terrorists. Kasab’s body would have been found with an identity card bearing a fictitious Hindu name, he writes in his memoir, Let Me […]