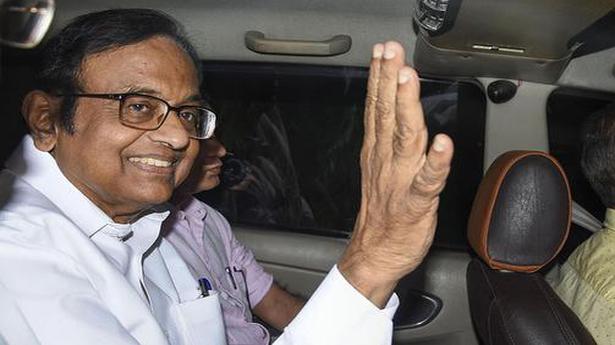 The Bench set aside the September 30 order of the Delhi High Court refusing bail to the senior Congress leader.

The court said Mr. Chidambaram should be released if he had not been arrested in any other case. The senior Congress leader is currently undergoing a seven-day remand in the custody of the Enforcement Directorate which is investigating the money laundering angle in the INX Media case.

He was arrested by the ED shortly before the judicial remand of 60 days for the CBI case came to a close. The CBI last Saturday filed its charge sheet against Mr. Chidambaram and 13 other accused in its part of the INX case. The accused persons have been charged with offences such as forgery. The trial court has taken cognisance of the charge sheet.

‘Should not leave country’

As condition for bail, the Supreme Court ordered Mr. Chidambaram to pay a personal bond of ₹1 lakh. The court directed that Mr. Chidambaram should not leave the country without permission.

Solicitor General Tushar Mehta, appearing for both the CBI and the ED, stressed that the bail order should not influence the proceedings by the ED.

Justice Banumathi said the court had specified that the bail order “shall not have any bearing in any other proceedings”.

Senior advocate Kapil Sibal said both the investigations by both the agencies were based on the same set of facts in the same case.

Further, the court set aside the observations made by the Delhi High Court and said such remarks should not influence the lower court.

The Supreme Court had heard extensive arguments made by Mr. Chidambaram’s lawyers and Mr. Mehta, for CBI, in the case.

The senior Congress leader had challenged the Delhi High Court decision to refuse him regular bail.

In his bail plea before the Supreme Court in the CBI case, Mr. Chidambaram had said “his continuing incarceration is in the form of punishment as his custody can neither be taken nor is required for the purpose of investigation”.

The High Court had denied Mr. Chidambaram bail on the basis of submissions by Mr. Mehta, which was also reflected in a ‘sealed cover’ report, that two material witnesses in the case were “approached” and told not to disclose information concerning Mr. Chidambaram and his son.

The Single Judge Bench of the High Court judge had observed that “this Court cannot dispute the fact that the petitioner has been a strong Finance Minister and Home Minister and presently, Member of Indian Parliament. He is respectable member of the Bar Association of Supreme Court of India. He has long standing in Bar as a senior advocate. He has deep root in the Indian Society and may be some connection in abroad. But, the fact that he will not influence witnesses directly or indirectly, cannot be ruled out in view of the facts. Moreover, the investigation is at advance stage, therefore, this Court is not inclined to grant bail”.

Mr. Mehta had argued in the Supreme Court that the CBI charge sheet against the former Minister and 14 others was the result of a “scientific and professional investigation” conducted in the INX Media case.

Mr. Sibal, for Mr. Chidambaram, had countered the CBI claim. Mr. Sibal had said the senior Congress leader was not interrogated even once by the CBI during his 58-day remand in the case.

“Even after 58 days, they have not interrogated me even once. In fact, I have been interrogated only once in the past two years. Either the CBI is thoroughly incompetent or they don’t have the evidence. They could have gone to court for permission to interrogate me during my judicial remand of over 40 days,” Mr. Sibal had submitted.

The senior advocate had said the case was a media trial.

Mr. Sibal had countered Mr. Mehta, saying the Supreme Court hearing is on grant of bail and not on the charge sheet filed earlier in the day. “Let them prove their charge sheet in trial. No point bringing it here in a matter of bail. I will answer the allegations in trial… The 2G case charge sheet contained serious allegations, finally what came of it?” Mr. Sibal said.

The Supreme Court on Tuesday, October 22, 2019 granted bail to former Finance Minister P. Chidambaram, two months after he was arrested by the CBI in the INX Media corruption case.

A bench headed by Justice R. Banumathi set aside the Delhi High Court’s September 30 verdict denying him bail in the corruption case.

The bench, also comprising Justice A.S. Bopanna and Hrishikesh Roy, granted bail to Mr. Chidambaram on a personal bond of ₹1 lakh with one surety of the like amount.

The top court said Mr. Chidambaram be released on bail if not required in any other case.

The bench made it clear that Mr. Chidambaram will not leave the country without prior permission of the court and make himself available for interrogation as and when called by the probe agency.

The bench clarified that its observation in the order granting bail to Mr. Chidambaram in the INX media corruption case would not have any bearing in other pending cases against him.

He is currently in ED’s custody in connection with a separate money laundering case.

Mr. Chidambaram was arrested in connection with the graft case on August 21 by the CBI, which chargesheeted him and others, including his son Karti and some bureaucrats, for causing loss to the exchequer by allegedly committing offences under the Prevention of Corruption Act and the Indian Penal Code.

‘Not a flight risk’

The top court also dismissed the CBI’s plea challenging the findings of the High Court which had said that Mr. Chidambaram was not a flight risk and cannot tamper with the evidence.

The bench also said the high court should not have gone into the merits of the case while deciding Mr. Chidambaram’s petition.

The apex court’s order came on Mr. Chidambaram’s appeal challenging the high court verdict denying him bail in the case.

The CBI registered an FIR on May 15, 2017 alleging irregularities in a Foreign Investment Promotion Board (FIPB) clearance granted to INX Media group for receiving overseas funds of Rs 305 crore in 2007, during Mr. Chidambaram’s tenure as the finance minister.

A chartered trainer aircraft crashed in Aligarh after one of its wheels got stuck in the high tension wire during landing at Dhanipur airstrip on Tuesday morning. According to police, all six passengers are safe. “VT AVV, a chartered plane which had four engineers and two pilots on board, got stuck in electric wires while […]

A team of senior police officers on Sunday inspected the ward where jailed RJD chief Lalu Prasad is undergoing treatment at the Rajendra Institute of Medical Sciences (RIMS) here. A purported video that recently went viral on the social media had showed more than three visitors at the paying ward of Prasad, in violation of […]