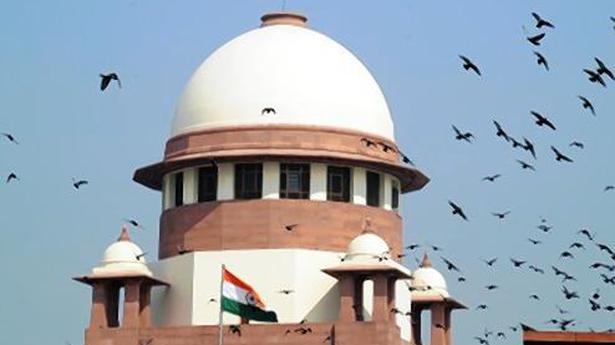 The AIADMK MLAs had approached the Supreme Court to restrain the Speaker from acting on a disqualification notice for anti-party activities issued in his name, in view of his endorsement of T.T.V. Dhinakaran’s leadership.

He claimed the Speaker could have acted in “partisan and biased manner contrary to the high position” because a motion for his own removal moved by DMK on April 30 was pending.

Senior advocate Mukul Rohatgi, for the Speaker, objected the MLAs coming straight to the apex court barely after the Speaker’s notice to them.

The Assembly Speaker had on April 29 issued a notice to three “dissident” AIADMK MLAs E. Rathinasabapathy, V.T. Kalaiselvan, and V.T. Prabhu for supporting Mr. Dhinakaran, who along with V K Sasikala floated their own outfit following the death of Jayalalithaa on December 5, 2016.

The petitioner contended that the action by the Speaker was taken in an arbitrary manner without jurisdiction and actuated with malice.

The petitioner also contended that with a no-confidence motion pending against the Speaker, he could not adjudicate in a matter of disqualification.

“It has been held by this court that it would be constitutionally impermissible for the Speaker to adjudicate a dispute of disqualification petition under the Tenth Schedule of the Constitution while a notice of resolution for his own removal from the office of Speaker is pending,” his petition stated.

One injured as powerful bomb explodes in Imphal

A powerful bomb exploded early on January 23 in the heart of Imphal. One girl was injured. Glass panes and doors of over 30 shops were shattered. No outfit has claimed responsibility so far. Police said that security had been beefed up in view of boycott calls by rebel groups ahead of Republic Day. Source: […]

Officials of the Sri Brihadeeswarar Temple (Big Temple) in Thanjavur have dismissed as fake news a video clip in which a person alleges that some ancient Tamil inscriptions were being replaced with ones in Hindi. The video had gone viral on social media over the past few days. Dismissing the video as nothing but misinformation, […]