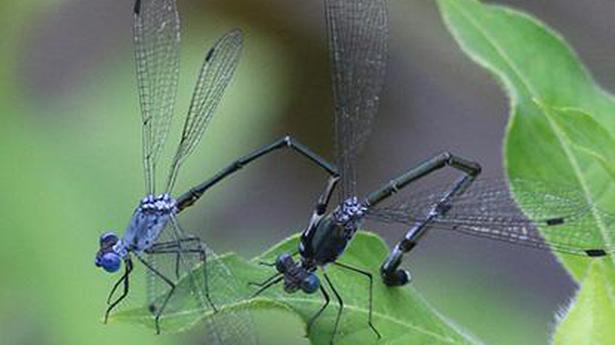 A survey of dragonflies and damselflies held in the Silent Valley National Park (SVNP) has discovered eight new species, but reported an alarming decrease in the odonate population, raising concerns over the ecological impact of the successive floods in the State.

The three-day survey, conducted last week jointly by the Silent Valley National Park and the Society for Odonate Studies, showed that several dragonfly species, including the Global Wanderer (Pantala flavescens), were missing from the national park. V. Balachandran, secretary of the Indian Dragonfly Society, said that the aberrant rain pattern and the successive floods in the State could have decimated the population of dragonflies and damselflies in the SVNP.

“Odonates spend much of their lifetime as eggs and larvae under water. The floods could have washed them off. We need to conduct more studies in other parts of the State to get a clearer picture,” said Mr. Balachandran.

However, eight new odonate species were found in the survey held in 11 camps across the buffer and core areas of the national park.

“Our study teams came up with 75 species of dragonflies and damselflies, taking the total number of odonate species in the Silent Valley to 91,” said Silent Valley Wildlife Warden Samuel Vanlalngheta Pachuau.

The new species found in the survey includes the Hemicordulia asiatica (Asian Emerald), which was reported from the Periyar Tiger Reserve in 2017. This rare dragonfly had gone unreported for over 80 years, and this was its second sighting from any protected forest in the State.

Mr. Pachuau said odonates were great biological indicators and studies on them would provide crucial information on the health of aquatic habitats and variations occurring in the climate. Odonates are good pest controllers, too.

“Regular monitoring over a long period will help us assess the changes in our natural landscape. The Silent Valley National Park aspires to be the front runner in such initiatives,” said Mr. Pachuau.

If citizens were to vote for a candidate with a never say die spirit and one with impressive credentials irrespective of the ‘strong’ opponents from other rival political parties, Bharatiya Janata Party’s N. Ramchander Rao should be winning handsomely. The senior BJP leader, city president, prominent advocate and member of the Bar Council, Mr. Ramchander […]

The Income Tax department personnel from Bengaluru have launched a search operation in several places on properties linked to people associated with the Janata Dal (Secular), on Tuesday. In Mandya, searches are underway at the properties of S.P. Swamy Somanahalli near Maddur and Thimmegowda at Pandavapura. According to souces in JD(S), the searches began in […]

Board put up at Hassan temple welcoming all