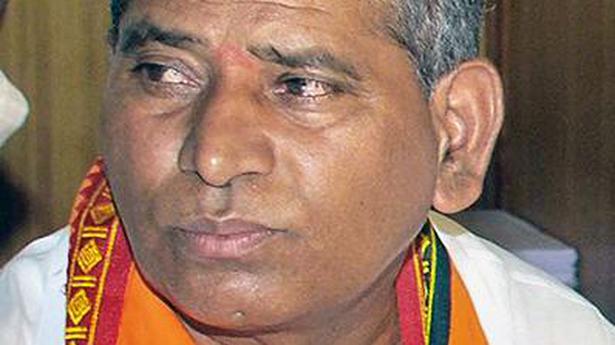 People of Koppal parliamentary constituency are under the grip of suspense as to who would be the BJP candidate for the Lok Sabha election.

Though the Congress has announced Rajashekar Hitnal as its candidate, the BJP has not yet finalised the name of its candidate, even as the process of filing nomination papers would commence on Thursday.

Expectations of people, particularly that of BJP supporters, was that Karadi Sanganna, incumbent MP, would be fielded again in view of the State leaders forwarding only his name to be approved by the central leadership. However, going by the delay in announcing the name of the candidate, it appears that the central leadership is not so keen on renominating Mr. Sanganna.

Enquiries revealed that the central leadership had got a report of its own over the prospects of winnability in Koppal and wanted to field a candidate capable of winning the seat.

Supporters of Mr. Sanganna are surprised and worried over the delay in clearing his name.

Sources in the BJP told The Hindu that Mr. Sanganna managing to get his son Karadi Amaresh party ticket in the last minute to contest the 2018 Assembly elections (Mr. Amaresh lost the election) and he being at loggerheads with a couple of senior Rashtriya Swayamsevak Sangh leaders in the State, who are now occupying prime posts at the New Delhi level, may be the main reasons for the party central leadership not being keen to renominate him.

Another possibility for the delay in announcing the candidate, sources said, might be K. Basavaraj, son of the former MLA K. Sharanappa, vying for party ticket by using his connections with the family doctor of BJP national president Amit Shah.

‘Out basin use of water not reasonable’

Witness appearing for Telangana before the Krishna Water Disputes Tribunal (KWDT-II) Ghanshyam Jha has stated that functional dynamics of water sector have to be kept in mind for equitable distribution of water among the riparian States. During his cross-examination by senior advocate of Andhra Pradesh R. Venkataramani before the tribunal chaired by Justice Brijesh Kumar […]