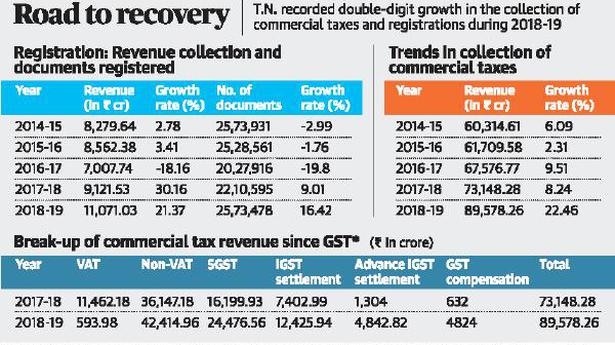 As for the gross collections of commercial taxes, the growth rate was 22.46% and in the case of registration of documents, 21.37%.

Specific reasons apart, the broad message that has emerged out of the development is that the State is showing stable signs of economic recovery after demonetisation in November 2016 and introduction of the Goods and Services Tax (GST) in July 2017, officials of the Commercial Taxes and Registration Department indicate.

To the pleasant surprise of the officials who were originally anxious about the adverse impact of the GST on finances of the State government, the post-GST situation has revealed that Tamil Nadu is as good a consumption State as a manufacturing State.

The degree of tax buoyancy, though not very high, has been “reasonably good,” the officials point out. Prior to the GST launch, the State governments of Tamil Nadu, Maharashtra and Gujarat had nursed apprehensions that the GST would not be beneficial to them as it is destination or consumption-based tax.

The officials attribute increase in prices of petroleum products, covered under the categories of non-VAT and non-GST items, to the growth in the gross collections of commercial taxes. Even though not all the claims of the State government towards GST compensation and Integrated GST settlement have been cleared, the Centre has approved the payment of substantial amounts under the two components for 2018-19. Still, approximately ₹5,000 crore is yet to be received by the State government from the Central government.

However, due to reduction in GST rates last year, the State experienced shortfall in GST collections vis-à-vis the earlier estimates. This is why it is being given the GST compensation, an arrangement that will continue for another three years.

“If you remove the GST compensation, IGST settlement and similar other aspects from the gross collections, the effective growth rate in GST collections comes to 8%,” says a senior official of the department, adding that the compensation scheme has been worked out by assuming an annual growth rate of 14% in revenue collections and keeping 2015-16 as the base year.

With regard to registration of land documents, the State almost touched what it did in 2014-15.

The continuance of the regularisation scheme of unapproved plots & layouts and 33% reduction in guideline value coupled with increase in the registration fee from 1% to 4% had contributed to the growth rate.

Another official expresses the hope that the current year would also be favourable for the real estate sector in the light of a decision of the GST Council early this year to reduce the rate from 18% to 1% for under-construction houses for economically weaker sections of society and 5% for others.

The Manipur government has collected blood samples in a village bordering Myanmar where two people — a woman and a girl — died of a ‘mysterious’ disease that left “black marks all over the body”. Two others, including a woman, were taken to the nearest hospital from Khamasom Phungthar village in Ukhrul district. The village, […]

Nine persons, mostly spectators, sustained injuries during a jallikattu event held in Keezha Kolathur near Ariyalur on Saturday. All of them were provided treatment at a special camp set up at the venue by the Public Health authorities. As many as 210 bulls, brought from different parts of Ariyalur, Perambalur, Tiruchi, Pudukottai and neighbouring districts, […]

On a day when the State police received a sharp rap on the knuckles from the High Court over the probe into what the police claimed as illegal emigration and what the court perceived as human trafficking of 80-odd people from Malyankara, near here, the Special Investigation Team probing the case took into custody six […]