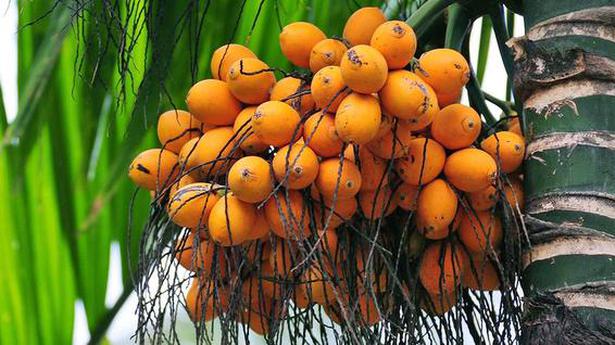 At a time when the prices of cash crops such as rubber, pepper, and coffee declined drastically, areca nut cultivation was the mainstay for many a farmer in the State.

But various afflictions, climate change, and a sharp fall in price of the produce have fuelled the farmers’ worries. The spot price of white areca nut in the regional market on Saturday was ₹170 to ₹180 a kg as against ₹230 a kg during the corresponding period last year.

Production declined to nearly 70% this year owing to a spurt in diseases such as yellow leaf disease and nut rot after the deluge in August 2018, says A. Jaison a farmer at Thamarassery in Kozhikode district. Fungal diseases such as crown rot is also posing a major threat to areca nut farmers.

The import from Malaysia via Sri Lanka, where there is a lower duty under the South Asian Free Trade Area (SAFTA) agreement, and illegal import from Indonesia through Myanmar are the major reasons for the declining price of the produce, trading sources said.

After the government increased the minimum import tariff to ₹251 a kg last year, imports through regular channel have come down. But many traders have found a way to circumvent it as the duty varies in different countries, the sources added.

The Ernakulam district administration took control of St. Mary’s Church at Piravom amidst high drama involving members of the rival Jacobite and Orthodox factions after the Kerala High Court ordered the removal of supporters of the Jacobite faction from the church premises on Thursday. The two-day stand-off ended around 1.45 p.m., the deadline set by […]

Shamnad Basheer may have died of suffocation: Police

A day after legal scholar Shamnad Basheer was found dead in his car in Karnataka, police on Friday said he may have died due to suffocation, discounting the possibility of any foul play. Basheer, an alumnus of the National Law School of India University here and the Oxford University, was found dead by police in […]

SC, ST, educationally backward people in J&K, Ladakh will continue to get reservation in jobs: Govt

People belonging to scheduled castes, scheduled tribes and other socially and educationally backward classes in the union territories of Jammu and Kashmir and Ladakh would continue to get the benefit of reservation in jobs, the Centre said on Wednesday. “Before the revocation of Article 370 and 35A, ‘The Jammu and Kashmir Reservation Act, 2004’ was […]