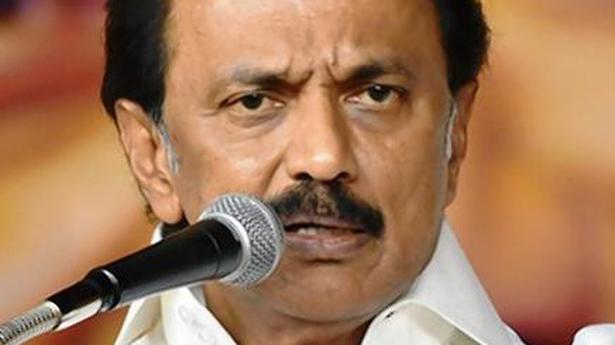 DMK president M.K. Stalin on Saturday took exception to the State’s government stand in the Supreme Court that it could not conduct local body elections because of the delay in obtaining electoral rolls. He went on to allege that Municipal Administration Minister S.P. Velumani was delaying the elections so that he could directly control the local bodies.

“His sole objective is to bag commission from tenders awarded for execution of works in local bodies. The basic problems of the people cannot be addressed without the presence of elected representatives and special officers cannot fulfil people’s aspirations,” he said.

Mr. Stalin said both the State government and the State Election Commission filed petition after petition in the court to avoid election to local bodies and thereby undermined democracy.

Amid exodus of Muslim members, M.P. BJP reaches out to them

The BJP’s insouciant response to minority members quitting in droves over the Citizenship (Amendment) Act, a challenge it is grappling with in Madhya Pradesh, has propelled a spiralling spate of resignations showing no signs of abatement. But faced with a sturdy Congress government treading cautiously on policy matters, recent setback in the Jhabua Assembly byelection […]

The State government is set to don the role of a career educator and trainer to equip students to effortlessly crack entrance and other competitive examinations and also make them employable to meet the global job market challenges. A draft career policy drawn up at the behest of Labour Minister T.P. Ramakrishnan, claimed to be […]