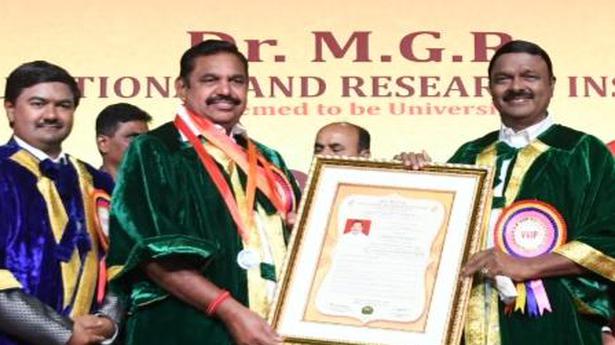 Tamil Nadu Chief Minister K Palaniswami was conferred a honorary doctorate by a deemed university in Chennai on Sunday.

Mr. Palaniswami was conferred the “Degree of Doctor of Letters (Honoris Causa),” at the 28th convocation of the Dr MGR Educational and Research Institute.

This is the first honorary doctorate received by Mr. Palaniswami, who became Chief Minister in 2017.

University founder chancellor, A C Shanmugam, a former MP and an MLA, said this was the first time the varsity conferred a honorary doctorate on a Chief Minister.

Mr. Shanmugam is also the founder leader of Puthiya Neethi Katchi, which is an ally of the ruling AIADMK.

He had unsuccessfully contested the recent Vellore Lok Sabha election on the ruling party’s Two-Leaves symbol, losing to the DMK nominee.

108 foreigners from Delhi event in quarantine in Bengal: Mamata

West Bengal Chief Minister Mamata Banerjee on Wednesday said 177 people including 108 foreigners from various countries who had taken part in the Tablighi Jamaat event in Delhi had been put under quarantine in the State. “Within six hours of receiving the information, we quietly began to work. Around 10-12 days ago, we put 108 […]

The State will soon have 40 cyber crime police stations and six cyber labs to tackle the increasing number of crimes. The dedicated cyber stations and labs will be equipped with tools to retrieve data, including deleted ones, from mobile phones, SIM cards, laptops and hard disks, software for hacking and surveillance of computer systems. […]

The selection of Devendrappa, who recently quit the Congress, as BJP candidate for Ballari Lok Sabha seat, is being seen as an indication that the party is looking beyond the ‘Ballari Reddy brothers’ to wrest this seat from the Congress. The BJP, which hitherto depended mainly on the Reddy brothers, especially the former Minister B. […]