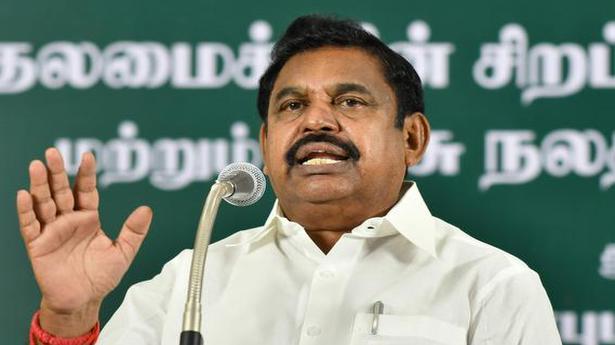 In his statement, Mr. Palaniswami condoled the death of two-year-old Sujith Wilson, whose body was recovered from an abandoned borewell pit at Nadukattupatti bear Manapparai in Tiruchi district.

“I extend my deep condolences to Sujith’s parents and relatives,” he said and thanked Ministers and officials who were involved in the rescue round the clock.

Three Ministers — C. Vijaya Baskar, Vellamandi N. Natarajan and S. Valarmathi — and Commissioner of Revenue Administration were deputed to the site to supervise rescue operations that commenced after the boy fell into the pit on Friday evening.

It was unfortunate that despite massive rescue operations that went on round the clock, the boy could not be saved, the CM said.

Noting that the procedures and rules to be followed while digging a borewell had been notified in the Government Gazette since long, Mr. Palaniswami said: “I have instructed District Collectors to ensure compliance and to take strict action against violators.”

The Rashtriya Swayamsevak Sangh (RSS) and the BJP were refraining from discussions on mob lynching as they are “afraid of the word”, CPI Central Secretariat member Binoy Viswam has alleged. He told the media here on Thursday that RSS chief Mohan Bhagwat had recently said that the word “mob lynching” was a Western import and […]

Thrissur saw around 300 tigers, in all possible colours, prancing around at a rollicking show of Pulikkali as a part of the city’s Onam celebrations. The term Pulikkali literally means ‘play of the tigers’. The folk art form is native to Kerala and is performed on the fourth day of Onam. Performers are painted like […]

Mullakara Ratnakaran, MLA, has recommended for a permanent system to tackle rain-related calamities since rain has become very erratic due to climate change. Pointing out the need to address the situation and the necessity for such a system in place, he made the suggestion at a District Development Committee (DDC) meeting held here on Saturday. […]