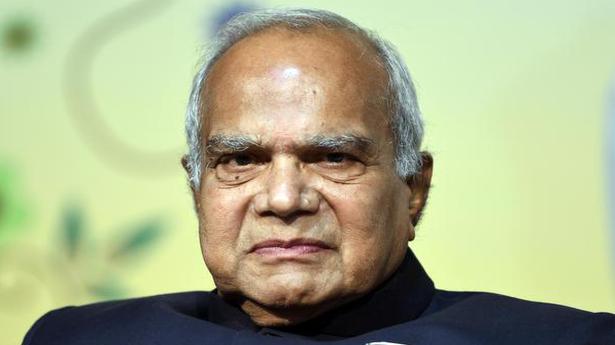 Tamil Nadu Governor Banwarilal Purohit is said to have informally indicated to Chief Minister Edappadi K. Palaniswami that he is not inclined to agree with the Cabinet’s recommendation to release seven life convicts in the assassination case of former Prime Minister Rajiv Gandhi.

As of now, Mr. Purohit has not conveyed anything in writing to the government about his decision. But the hint from him is that he would not like to go along with the Cabinet’s recommendation made in September 2018 for premature release of the convicts, according to multiple sources.

The Governor’s position should not be a matter of surprise, an official explained, in the light of a Presidential Order issued through the Union Ministry of Home Affairs in April 2018.

In response to the State government’s proposal in February 2014 and March 2016 to release the convicts, the order said the move would “set a very dangerous precedent and lead to international ramifications”.

Before making its recommendation in September in 2018, the government received opinion from Advocate-General Vijay Narayan too. He held that the Governor had “unfettered power” under Article 161 (to grant pardons and to suspend, remit or commute sentences in certain cases) to decide on their release.

In the last year or so, the State government sent a few reminders to the Raj Bhavan, but the response was that the matter was under “consideration”, said the sources.

After the State Cabinet had made its recommendation to the Governor on the release, Mr. Purohit met people from the two sides — one urging the Governor to accept the Cabinet’s decision at the earliest and the other, not favouring any hasty decision. Among the representatives of the two sides were Arputhammal, mother of Perarivalan, and relatives of the victims of the bomb blast that killed former Prime Minister Rajiv Gandhi and 15 others at Sriperumbudur in May 1991.

The basic argument being adduced in favour of all the convicts for their premature release is that the convicts had spent more than 25 years in prison.

In May 2019, the Supreme Court disposed of a petition filed by six persons against the State government’s 2014 proposal to grant the convicts remission. Subsequently, Mr. Purohit sought opinion from legal experts who were outside the State.

At that time, Tamil Nadu Congress Committee president K.S. Alagiri said that though the court had ruled that it was for the Governor to decide on the matter of release, it had not suggested any particular decision on the part of the Governor.

In July, the Madras High Court held as “not maintainable” a writ petition filed by Nalini, who had wanted a direction to the Governor to “countersign” the government’s decision.

A Committee of Secretaries (CoS) , headed by Cabinet Secretary Rajiv Gauba, would examine the financial stress of the telecom sector and recommend measures to mitigate it, an official source said on Tuesday. The measure would be recommended “keeping in view the larger public interest and improving telecom services for subscribers,” the source said. The […]

Congress president Rahul Gandhi on Monday said Prime Minister Narendra Modi is a “boxer” who entered the ring to fight unemployment but ended up punching his “coach” and veteran BJP leader L.K. Advani. Mr. Gandhi used the boxer analogy at a poll rally in Bhiwani, which is known as India’s boxing nursery and has produced […]

A woman here has alleged that a BSP leader whom she accused of rape has sent out threats from prison that she would “meet the same fate” as the Unnao rape victim. The former student of a Varanasi college had in May lodged an FIR against Atul Rai, who is in jail and yet to […]