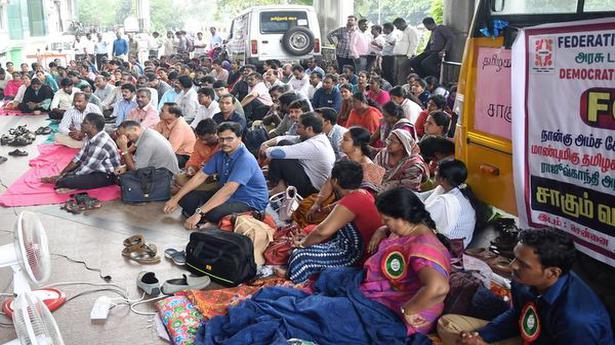 As the indefinite strike by doctors affiliated to the Federation of Government Doctors Association entered the third day on Sunday, the Tamil Nadu Medical Students Association (TNMSA) has decided to support the strike from Monday.

TNMSA, which comprises house surgeons and post graduates, in a press release stated that they would take part in forthcoming protests in various ways.

A striking doctor said that the patient flow would start increasing on Monday, and services would be affected. Already, the number of patients reporting with fever is on the rise, he added.

Except emergency services, they are boycotting out patient and in-patient care.

Meanwhile, five doctors are continuing their fast on the premises of Rajiv Gandhi Government General Hospital seeking the Chief Minister’s intervention. On the occasion of Deepavali, a few family members accompanied the striking doctors.

Petitions have argued that 4G speed is essential for healthcare, education during pandemic Source: thehindu.com Related

I do not consider anyone a challenge, says Stalin

Tiruchi Dislodging the BJP rule at the Centre and the AIADMK government in the State is the only challenge before us now, said DMK president M.K Stalin in Tiruchi on Thursday. “I do not consider anyone a challenge,” he observed when asked whether he viewed the AMMK to be a bigger challenge than the AIADMK. […]

Kerala is all set to launch a massive total digital literacy campaign ensuring that the benefits of the State’s emergence as an inclusive knowledge-based society reaches down to the grassroots. Powered by the Kerala State IT Mission and Kerala Literacy Mission, the campaign, ‘I am also digital’, will be based on the participatory model by […]